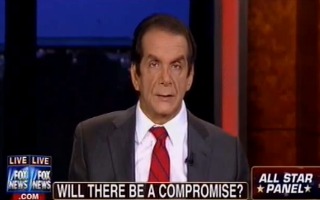 Conservative columnist Charles Krauthammer has reviewed President Barack Obama’s first offer as a means of resolving the impending fiscal cliff and found them wanting. In fact, he found them to be insulting and certainly unserious. On Fox News Channel’s Special Report on Thursday night, and today in his weekly syndicated column, Krauthammer has urged the GOP – willing to compromise on some principles but not to commit Hara-kiri – to walk away, take the public relations hit and let Obama contemplate a second term marred by higher unemployment and a deeper recession than his first term.

After Obama was reelected, House Speaker Rep. John Boehner (R-OH), supported by many in the House GOP caucus, signaled his willingness to cave on their resistance to higher income tax rates for the nation’s wealthy. He did so with the caveat that this must be paired with a bargain on entitlement spending in order to finally address the nation’s largest debt drivers.

For three weeks, the White House was silent. Then, on Thursday, Treasury Sec. Timothy Geithner communicated the details of the president’s opening offer to resolve the fiscal cliff to Congressional Republicans:

• Increase marginal tax rates, including income, capital gains and dividends.
• Reinstate the 2009-level estate tax
• A new, multi-year stimulus package with no less than $50 billion in stimulus funds spent in 2013
• A permanent increase in the debt ceiling limit

Geithner said that there would be non-specific spending cuts and entitlement reforms which would not take place for at least one year. This proposition reminded Republicans of the much-maligned deal offered by Congressional Democrats and accepted by President Ronald Reagan to raise taxes in exchange for spending cuts. The taxes were raised but the spending was never cut. Obama’s terms were a non-starter.

“It’s not just a bad deal, this is really an insulting deal,” Krauthammer said on Thursday. “Robert E. Lee was offered easier terms at Appomattox.”

In fairness to Gen. Ulysses Grant, Lee was offered strikingly lenient terms of surrender at Appomattox. Lee’s troops were allowed to keep their side arms. Grant transferred copious rations from Union to Confederate lines. Finally, the Army of Northern Virginia was allowed to disperse rather than sit out the rest of the war in Union prisoner camps. Grant was interested in sowing the seeds of a national reconciliation – had he not been lenient, there was the real potential that Confederate troops would take to the hills and mount a generations-long guerrilla campaign. That was the course recommended by many in Lee’s inner circle.

President Obama’s offer to Congressional Republicans has the opposite purpose in mind. This deal is designed to be so unpalatable as to not invite a counter offer. It is designed to split the elements of the GOP willing to compromise with the president and those Republicans who view their retention of the House in the 2012 elections as a mandate to continue to oppose the Obama’s agenda.

On Friday, in his weekly syndicated column, Krauthammer repeated his call for Congressional Republicans to bolt. Let America go over the fiscal cliff. Yes, he conceded, the consequences for the nation’s economy will be bad – not as bad, however, as if the Republicans acquiesced to economy-suffocating tax increases and augmented spending recommended by the White House. But the political consequences, Krauthammer advised, will be as bad for the Republican party as they will be for President Obama.

If we all cliff-dive, he gets to preside over yet another recession. It will wreck his second term. Sure, Republicans will get blamed. But Obama is never running again. He cares about his legacy. You think he wants a second term with a double-dip recession, 9 percent unemployment and a totally gridlocked Congress? Republicans have to stop playing as if they have no cards.

Washington’s elected officials, Krauthammer says, know that no amount of tax increases on the wealthy could fund the federal government’s present outlays. Only a middle class tax hike can fulfill Washington’s revenue needs with no spending cuts – so let the Democrats have that tax increase on the middle class. “The full Clinton,” he calls it.

Earlier this week, the shape of a deal appeared to be coming together – Democrats were coming to terms with painful reforms to entitlement programs. Republicans had reconciled the need to increase income taxes on the wealthy. Today, that framework has been scuttled. The White House has increased the pain that Republicans will have to feel and key opinion leaders like Krauthammer are urging Congress to call Obama’s bluff.

With a month left before America joins hands and jumps over the cliff and no resolution in sight, the optimism of earlier this week appears to have been misplaced.