Krauthammer’s Power Move: Force Democrats to Swear Off a Bailout of Insurance Companies 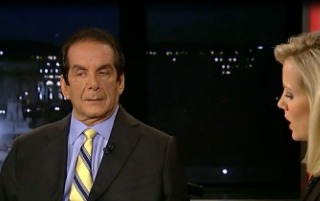 Accompanying virtually every discussion between left-leaning political commentators relating to an increase in the federal minimum wage is the fact, supported in polls, that this issue has the potential to split the Republican coalition. Aside from the altruistic reasoning which they submit justifies a minimum wage hike, there is the added cynical benefit provided by the fracturing of the GOP. Democratic loyalists have convinced themselves that this kind of economic populism may be the only thing preventing the narrative from escaping their control next year as Democratic politicians seeking reelection climb over one another in their efforts to run away from the Affordable Care Act.

Well, rank political cynicism cuts both ways. While the rolling disaster that is the ACA has focused public opinion on the law’s flaws, syndicated columnist Charles Krauthammer advised the Republican Party to strike, without delay, in order to frame future political debates squarely in the terms of the reform of the massive overhaul of the nation’s health care system.

The first months of the ACA’s implementation have been nothing short of a thumb in the eye to the insurance industry – a thumb they invited and deserve little sympathy for suffering. However, the way in which these firms have been abused by the callous whimsy of this administration does inspire concern.

The latest in a string of insults to the insurance industry occurred last Thursday night when the White House simply deemed that certain groups no longer needed to abide by the law. Indeed, the individual mandate in the ACA no longer applied to those 20-somethings who qualified for an ill-defined “hardship exemption.” With premium prices locked in for 2014, insurance providers were stuck footing the bill for the older, sicker pool of insured.

This change was explicitly made, according to the letter addressed to a handful of Democratic Senators in which Health and Human Services Secretary Kathleen Sebelius announced this move, not for the health of the law but for the viability of the Democratic majority in the upper chamber of Congress. How’s that for cynicism?

The latest kneecapping of the insurance industry by this White House came on Monday in the form of a second delay of the first deadline of the Affordable Care Act – the deadline at which point those who need coverage by January 1 will have to enroll. That deadline was pushed back 24 hours, giving insurers even less time to process applications. The insurers were not even informed of the move. It was simply a change quietly made to HealthCare.gov’s backend code and cannot be altered even if insurers object.

All these modifications to the law threaten its financial viability. Each invites the much-discussed but rarely contemplated “death spiral,” wherein the insurance industry simply cannot provide competitive prices to the healthy insured who subsidize the care of the sick. In order to remain viable institutions, insurers will need a bailout. And the government does have the authority to provide them with one.

Few took interest in this provision prior to the law’s implementation because the language allowing a bailout was cleverly hidden in plain sight – languishing obscurely in a law which few ever bothered to read. If an insurer incurs losses of greater than 3 percent in the first three years of the ACA’s implementation, they are entitled to recoup those losses from taxpayers.

Krauthammer advises Republicans to demand in legislation that the government be stripped of the authority to provide insurance companies that have incurred losses from receiving a federal bailout. In early 2014, the nation will again hit the debt ceiling, a deadline that was agreed upon in the final deal that ended the government shutdown in October. That would be the maximally effective time to introduce to such a maneuver.

Given the lingering distaste in the public’s mouth from the federally administered bailouts of large financial institutions and industries hurt by the financial collapse of 2008, it is a safe bet that substantial Republican and Democratic majorities would oppose a bailout of the insurance industry.

And what would the Democratic response be? “Republicans are, once again, holding the full faith and credit of the United States hostage?” This tired line will most assuredly be dragged out of retirement once again – it was a line that worked marginally well for Democrats during the government shutdown.

At the time, though, Republicans were indicted by the public for overreaching in their efforts to forestall or prevent altogether the implementation of the ACA. Most observers saw shutting down the government and holding out on a debt ceiling increase as a Republican tantrum, entirely frivolous and politically motivated. Certainly, American voters reasoned, halting the ACA’s implementation could not be worth all that the fury GOP had summoned. Would they feel the same way today after months of the ACA demonstrating that it is a rolling, embarrassing disaster that cannot be implemented effectively?

Krauthammer wants Democrats to make that bet. Republicans should take his advice.