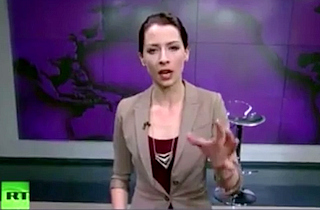 An anchor for the English language network RT — a Kremlin-controlled news outlet whose coverage on the crisis in Ukraine has been, er, selective — went off-script Tuesday morning and condemned Russia’s incursion into the Crimean peninsula.

At the end of her show, Abby Martin, host of Breaking the Set, asserted her strong disagreement with Russia’s actions, which she explicitly called a “military occupation”:

“Before I wrap up the show, I wanted to say something from my heart about the ongoing political crisis in Ukraine, and Russia’s military occupation of Crimea. Just because I work here, for RT, doesn’t mean I don’t have editorial independence. And I can’t stress enough how strongly I am against any military intervention in sovereign nations’ affairs. What Russia did is wrong.”

Martin admitted she did not have an expert’s grasp on the history of Ukraine’s relations with Russia (perhaps a dangerous admission, as we’ll see below), but objected to military intervention in any and all cases.

“I admittedly don’t know as much as I should about Ukraine’s history or the cultural dynamics of the region, but what I do know is that military intervention is never the answer. And I will not sit here and apologize or defend military aggression.

[snip] “All we can do now is hope for a peaceful outcome for a terrible situation, and prevent another full-blown Cold War between multiple superpowers. Until then, I’ll keep telling the truth as I see it.”

Her reward? A free trip to the Crimean Peninsula. RT responded shortly after Martin’s missive:

“Contrary to the popular opinion, RT doesn’t beat its journalists into submission, and they are free to express their own opinions, not just in private but on the air. This is the case with Abby’s commentary on the Ukraine.

“We respect her views, and the views of all our journalists, presenters and program hosts, and there will be absolutely no reprimands made against Ms. Martin.

“In her comment Ms. Martin also noted that she does not possess a deep knowledge of reality of the situation in Crimea. As such we’ll be sending her to Crimea to give her an opportunity to make up her own mind from the epicentre of the story.”

Watch the clip below, via RT: