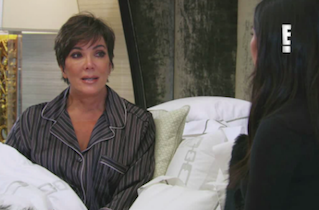 While ABC News got all the glory (and ratings) for Diane Sawyer‘s big interview with Bruce Jenner, who discussed his transition into a woman for the first time, E! is eagerly trying to cash in as well. Last night’s episode of Keeping Up with the Kardashians included Bruce Jenner’s first post-interview TV appearance and the show is planning to air a two-part About Bruce special on May 17 and 18.

“He has to deal with this for the rest of his entire life, waking up and feeling like, ‘Whoa, this isn’t my body. This doesn’t feel comfortable,’” Kim Kardashian can be seen telling her mother in the first preview clip from the special, using the male pronoun for her step-father as various news outlets have done until Jenner makes it clear that he wants to be called “she.”

“That’s the only way I can kind of imagine it,” she adds. “And you really have to, like, let go.”

“I have these memories of this life,” Kris Jenner replies through tears, speaking of the time she spent with her ex-husband. “And I feel sometimes like it didn’t exist.”

Kardashian’s words echo the sentiments of her husband, Kanye West, who Bruce Jenner credited with helping his family understand the situation. “I can be the most successful person in the world, I can be married to the most beautiful woman in the world, which I am,” West allegedly told his wife. “But I’m nothing if I can’t be me… if I can’t be true to myself.”

During the ABC News broadcast, Kris Jenner took heat from Perez Hilton and others for not commenting on the record in support of her ex-husband, claiming no one had reached out to her from the network (a suggestion ABC denied). Once the interview was over, Jenner posted this tweet to show her support:

Watch video below, via E!: