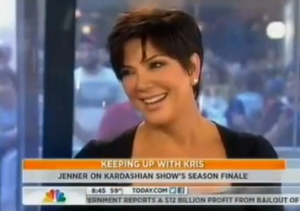 Two days ago, NBC aired Keeping Up with the Kardashians reality star Kris Jenner‘s interview instead of the national 9/11 anniversary moment of silence, outraging many. Don’t think the mother of six was flattered to have some extra TV time, though. The California native is reportedly furious about the headline-making incident.

“Kris is a big supporter of the troops and she’s very upset about this,” a source told RadarOnline. “She had absolutely nothing to do with the decision to skip the national moment of silence on 9/11, and suddenly she’s in the middle of it, and it’s her face being shown on TV while it’s being discussed. She isn’t saying so publicly but she is furious. She’s angry the show put her in this position. It is not clear if she realized the moment of silence was being observed while she was discussing breast implants.”

NBC issued an apology on Wednesday for the “editorial call” gone wrong:

“Yesterday, we made an editorial call resulting in the September 11 moment of silence not being seen. While we dedicated a substantial amount of airtime to anniversary events, we still touched a nerve with many of your viewers…and for that we apologize.”

But the damage had already been done. Hollywood Reporter senior editor Alex Ben Block said of the mishap:

“It will leave a lot of people with a bad taste and that could over time translate into a loss of viewers. It is clear NBC needs to do things that make them stand out, but this stunk up their image instead, at a time they need to be in image repair mode.”