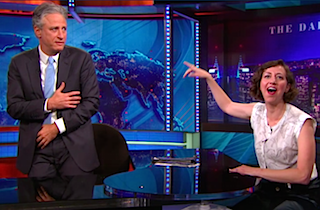 Senior Women’s Issues Correspondent Kristen Schaal dropped by The Daily Show Tuesday night to tackle an unlikely trend that is sweeping the nation: the “dad bod.” As she put it, “It’s time society finally accepted a man’s body changes when he has kids.”

“You don’t have to be a dad to have a dad bod,” Schaal explained. “You just have to be really lazy.” And, as evidenced by recent media coverage, no one is lazier than male news anchors, “who get most of their exercise by turning from camera 1 to camera 3.”

“They’re all having a really good belly laugh,” Schaal said. “Well, the guys are. If that woman had a belly at all, they would not let her on that show.”

At the end of the segment, Schaal urged Stewart to proudly show the world his dad bod. “All that not working out, focusing on others things besides your body,” she said, “why don’t you stand up and give the audience a little treat, show them what a mostly adequate physique looks like?”

“Show off how your looks are not what society values most in you,” Schaal told Stewart as he slowly twirled around and cried softly to himself.