Kristol Battles Mika: ‘War on Women’ Not in the Top 20 Problems in U.S.
VIDEO

Kristol Battles Mika: ‘War on Women’ Not in the Top 20 Problems in U.S. 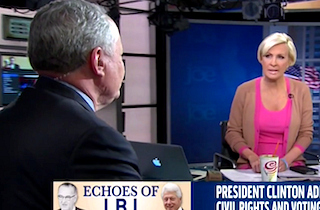 In the wake of the Paycheck Fairness Act’s defeat in the U.S. Senate yesterday, Morning Joe co-host Mika Brzezinski and Weekly Standard editor Bill Kristol battled over the necessity of the legislative changes, as Brzezinski said the law on the books prohibiting pay discrimination was “broken every day.”

“If you look at the actual statistics, and control for education and hours worked, women have about 97% of the salaries of men, and younger women in their twenties and thirties have slightly higher salaries than men,” Kristol said. “Actually, the real problem if you actually talk to a serious economist about our workforce, the people who are really doing badly, and it’s a terrible thing, are young men. Especially young, less-educated men, working class men in their twenties and thirties. Globalization hasn’t helped them in the types of jobs that are produced.”

“So the notion that the ‘war on women’ or pay discrimination against women is in the top twenty problems in the United States is frankly ridiculous,” Kristol continued. “I say this as someone who is a big fan of women.”

“The fact that it’s illegal to discriminate means nothing for women in the workplace who are paid less than their male counterparts,” Brzezinski said. “The numbers out there, from the testimonials I’ve gotten from people, in the aftermath of writing my book about this, are that the numbers are far worse. They’re Lilly Ledbetter’s numbers. Women are getting paid half of what their counterparts make. You know why? Because companies can do that, because that law can be broken, and nobody knows about it.”

“Wasn’t the first law that President Obama signed was the Lilly Ledbetter Act?” Kristol replied. “Didn’t they deal with this when they had a Democratic Congress? Wasn’t it supposed to solve that? So why suddenly in 2014 when the Obama administration was floundering, when they’re desperately trying to appeal to their base, they go back to this decision. They passed the legislation they thought was necessary in 2009 and 2010. I’d like to see someone explain exactly what has changed that requires additional legislation.”