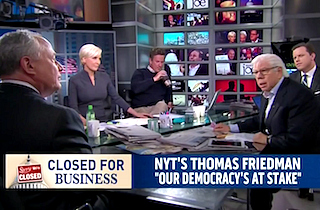 “This is the first time I can say this in the history of Morning Joe, Carl, but you’re actually outnumbered by conservatives this morning,” co-host Joe Scarborough told guest Carl Bernstein Wednesday morning.

Bernstein ignited a nearly eight-minute fight—epic by cable news standards—when he likened the House GOP’s effort to conflate the defunding or delaying of ObamaCare with government funding to McCarthyism.

“Eric Cantor (R-VA) and his Republican Party are the most dangerous, demagogic force in politics since Joe McCarthy,” Bernstein said. “What we’re seeing is a redefinition and understanding of Barack Obama’s presidency, which is to protect America’s security from this precipice from having the kind of power that’s ruinous to this democracy.”

“The’yre very comparable, because they deal not from fact but from wild accusation, that the government and the people of this country are going to be in hell if we have this kind of health care,” Bernstein said. “Let them try to delay [ObamaCare] without shutting down the government, without this kind of demagoguery, without these kinds of effects.”

“They’re trying to help to improve our health care by suspending this stupid individual mandate,” Kristol objected, “and Harry Reid (R-NV) will not bring them up for vote.”

Scarborough made a pox-on-both-their-houses argument that Senate Democrats had yet to pass an appropriations bill.

“I agree with you totally, except in terms of proportionality,” Bernstein. “The proportion of what we’re talking about here in terms of what one force is willing to do is quite different. A lot of the Democratic Congress is brain dead. But that is different from the kind of demagoguery that we have seen to the kind of oppositional politics to undermine Barack Obama and undermine American interests.”

“You’re saying it’s disloyal to oppose a president who’s reelected,” Kristol said. “Ronald Reagan was reelected in 1984. Tip O’Neill and he had a disagreement, and the government shut down for a couple of days. Nobody thought Tip O’Neill was disloyal, was being like Joe McCarthy. There were budget fights, there were fights over legislative priorities.”

However, Kristol added that, “If I were dictator of the Republican Party, I would have had a different set of tactics” than those of Cantor’s caucus.