Kristol to Carl Bernstein: FDR ‘Rolling Over in His Grave’ for Being Compared to Obama 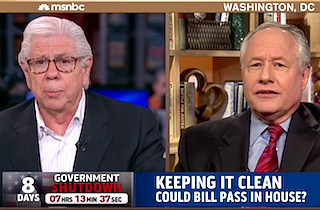 Weekly Standard editor Bill Kristol and legendary journalist Carl Bernstein clashed over the comparison of the Affordable Care Act to Social Security on MSNBC’s Morning Joe Tuesday morning, with Bernstein arguing that both programs were works in progress that would eventually bear fruit, and Kristol replying that Social Security was a bipartisan bill passed by a more unifying president.

Bernstein had made the argument that, like Social Security, Obamacare would need time to develop as policy, prompting a derisive laugh from Kristol.

“Ha!” Kristol said. “You really think this is like Social Security?”

“That was actually a good laugh,” host Joe Scarborough said.

“The first report out of the Congress was very one-sided,” Bernstein disputed. “Then there was a bipartisan vote. But the point is that you had Republicans in Congress during a New Deal who were willing to work with a Democratic president to create something and build something that has helped America for the last fifty years. We know that our medical care system, including our insurance system, needs reform. Obama took the Republican plan, not the public plan, not the so-called socialized medicine plan, and he built this thing that is going to work out over time, and we’re going to get it right eventually.”

“Franklin Roosevelt is rolling over in his grave to be compared to Barack Obama,” Kristol said. “Roosevelt was a serious legislator who worked with different factions of Congress, had southern Democrats, he had liberal Republicans. People thought you couldn’t actually manage Congress. He proved he could. He won a huge re-election victory and huge off year legislative victories. Barack Obama lost the Democratic majority in both houses of Congress in 2010, couldn’t get a Democratic House in 2012. Thank god from a conservative point of view that Barack Obama is no Franklin Roosevelt.”

The Democrats did not actually lose the Senate majority in 2010.