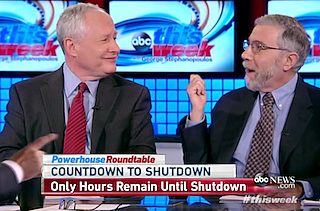 Weekly Standard editor Bill Kristol and New York Times columnist Paul Krugman went at it over the potential delay of ObamaCare on This Week With George Stephanopoulos Sunday morning, with Krugman accusing Kristol and the Republican Party of failing to understand the law they were trying so ardently to stop.

“One thing that’s going on here is just a failure on the part of the Republican caucus to actually understand anything about this thing,” Krugman said. “They haven’t done the policy.”

“In fact, all of the substantive news about ObamaCare over the last couple of months has been good,” Krugman continued. “Premiums are coming in below expectations. Health care costs are moderating. Probably there will be some technical glitches with the computer systems, but those are not fundamental. People who support this law are looking forward, they’re almost cheering, at the preliminary results. The odds are, this is going to do a lot of good for a lot of people. Why not put it into effect now?”

“Big business gets the delay,” Kristol said, “but individuals don’t.”

“This what I was talking about,” Krugman said. “This is policy ignorance, not understanding that the employer mandate is a trivial add-on to the law, while the individual mandate is central to it. You don’t understand that.”