Krystal Ball: Cliven Bundy and His Supporters Are ‘Gun-Toting, Anti-Patriots’ 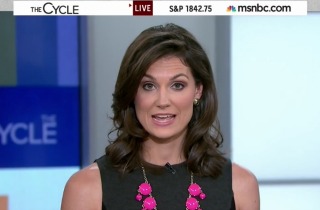 MSNBC host Krystal Ball delivered a monologue on Tuesday in which she lamented how the word “patriot” has been co-opted by conservative groups, many of which she said largely subscribe to “extreme anti-government doctrine.” Ball said that Nevada rancher Cliven Bundy and his supporters, who recently engaged in an armed standoff with federal agents over the use of federal lands for cattle grazing, are “anti-patriots.”

“That word though, ‘patriot,’ it’s become a really loaded one,” Ball remarked. She said that Bundy has become a figure that many on the right consider a “patriot” in spite of the fact that he “refuses to pay us what he owes for use of our land.”

“Mr. Bundy denies the legitimacy of our republic,” she continued. Ball added that groups that consider themselves patriots are often grounded “in extreme anti-government doctrine, conspiracy theories, and fear of impending government violence.”

“In fact, a lot of what is done under this banner of patriotism is anything but,” Ball submitted. “Cliven Bundy is no patriot over his refusal to pay money for his use of our land.”

“We on the left should not allow conservatives to get away with appropriating patriotism, bastardizing it, and claiming it as their exclusive domain,” she urged. “I’d rather watch the folks in Boston than even think of the gun-toting anti-patriots in Nevada somehow trying to make lawbreaker Cliven Bundy a hero.”