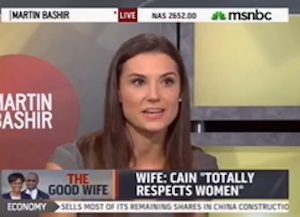 A silly aside from Herman Cain in a GQ interview landed him in hot water with Democratic strategist Krystal Ball on MSNBC’s Martin Bashir Monday. Ball was offended by Cain’s joke that Michele Bachmann represented the “tutti-frutti” ice cream flavor. “It’s very disrespectful! He picks on the one woman running and calls her tutti-frutti. I mean, say what you will about her policies and what she stands for, that’s just plain disrespectful!”

RELATED: Herman Cain Refers To Himself As ‘Black Walnut Ice Cream’ On Fox and Friends

Bashir had brought up Cain’s comments in the GQ interview after mentioning the former Godfather Pizza CEO’s remark that vegetable pizza was a “sissy pizza.”

The Washington Post‘s Jonathan Capehart was outraged over Cain’s choice of flavor of Mitt Romney. “Just plain vanilla! Can you imagine if the tables were reversed and Mitt Romney said ‘just plain chocolate?'”

“It would be unbelievable, the firestorm. But do you know what? Mitt Romney would never ever make that mistake.” concluded Capehart.

Devin Gordon: Let me ask you about your rivals. Recently, in response to a question about you being the new “flavor of the month,” you said you weren’t a flavor of the month, you were Häagen-Dazs black walnut, which “tastes good all the time.” If Mitt Romney was an ice cream flavor, what flavor would he be?

Herman Cain: Oh, just plain vanilla. [laughs] Are you guys really going to print this? I have learned that with my new status in the polls, any- and every thing that I say will show up somewhere. Do you guys really want to do this ice cream analogy?

Devin Gordon: We do. Rick Perry?

Herman Cain: Tutti-frutti. I know I’m going to get in trouble!

Herman Cain: I just don’t have a good description for Ron Paul, because he’s just not an ice cream flavor.

Let this be a testament that our political discourse has regressed so far that cable commentators are now aggrieved by politicians calling each other ice cream flavors. “Silly season,” indeed.

Watch Ball excoriate Cain over his ice cream comments below via MSNBC: