Krystal Ball: This Supreme Court Has Decided ‘Racism Is Over’
video

Krystal Ball: This Supreme Court Has Decided ‘Racism Is Over’ 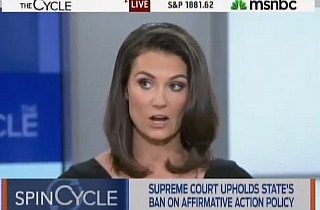 Reacting to a Supreme Court ruling on Tuesday, which found a voter initiative in Michigan prohibiting state university admissions boards from considering race to be constitutional, the hosts of MSNBC’s The Cycle expressed dismay over where the Court was taking the country when it came to race relations. MSNBC host Krystal Ball said that this Court’s ruling on this case, as well as on a challenge to the Voting Rights Act, suggests to her that they believe “racism is over.”

“We quite often have some — some — white people saying that they have, in schools and in jobs, that they are losing positions that they deserve, that belong to them, to unqualified black people,” MSNBC host Touré began. “The black people are always unqualified, and the whites are, in their mind, always more qualified than the black people.”

“This sense among some white people, again, that racism is a zero sum game,” he continued, “that white Americans are losing, is rather distasteful.”

RELATED: Affirmative Action Proponents Beside Themselves over SCOTUS Ruling

“And this Court seems to have taken the position that racism is over,” Ball submitted. “And you saw that most clearly, I think, in their decision dismantling an important part of the Voting Rights Act.”

She added that data suggests schools in the South are “re-segregating,” and that “apartheid schools” are on the rise. “While I would love to be there, I think the facts speak to the reality that we are not,” Ball said of racial equality in America.