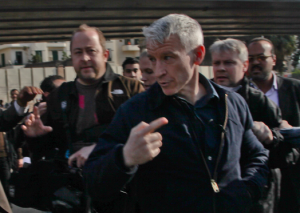 The Egyptian revolts have brought out the passion in many of America’s journalists, but arguably in Anderson Cooper more than any other. The CNN star, who was physically attacked while on duty in Cairo by pro-Mubarak thugs, has been fast and loose with disparaging the regime in quite the deviation from his usual style. The LA Times counted up the amount of times Cooper used only one insult– “liars”– in one episode: 14.

“That must have been some sort of new high,” writes James Rainey of the Times‘ “Big Picture” blog, recounting the number of times he heard the word, and even some unofficial swipes in the same vein:

A moment later he described the efforts of “Egyptian government efforts to hold on to power by lying to Egyptians and lying to the world.” He was off and running. By the time his show was over, Cooper also noted that the government “continues to distort or hide the truth about how many people have been killed or detained in the demonstrations.” (Nice change-ups, Anderson, but those don’t get logged on our tote board, because they aren’t derivations of the verb “lie.”)

Rainey somewhat cynically suggests the reason for Cooper’s outrage towards the regime manifesting itself in such a way is simple ratings lust, and that the coverage was a bit “one-note.” Surely, CNN can’t be upset at the fact that Cooper’s commentary on Egypt, even upon his return to America, has become must-see TV, but longtime viewers will know that Cooper is prone to such passionate outbursts in situations of particular strife. His reporting from the ruins of Hurricane Katrina and, more recently, Haiti had similar tenors, though in both situations there was no single villain. In the Egyptian revolution, there is no doubt that president Hosni Mubarak holds that title. To make the statement that the Haitian or US governments were to blame for the aforementioned disasters would always be, to some extent, an opinion. So is calling the Egyptian government liars, but the fact that the struggle is purely political to begin with, and that Mubarak’s forces attempted to handicap Cooper’s team significantly, grant Cooper the wiggle room necessary for such statements.

Whatever the reasoning, though, it will be interesting to watch Cooper’s attitude as the situation progresses and the military takes a stronger hold on the country. Surely a continued manifestation of this outrage will raise red flags– whether a self-aware loss of objectivity or not– but Cooper’s tone has ebbed and flowed with the urgency of many equally urgent situations in the past.