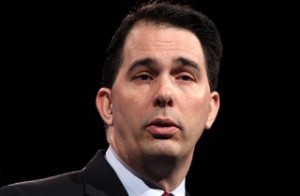 Scott Walker is the Tim Tebow of politics…the pro-life, conservative sensation on top of the world (or the polls) one moment, the invisible man the next.

For those who don’t know Tebow’s NFL story, here’s the short version: Drafted in the first round by the Denver Broncos despite most pundits saying at the time he didn’t have the arm to succeed in the NFL. Tebow takes over a struggling Bronco team, leads a bunch of unlikely comeback victories late in the season and somehow gets them to the playoffs. God’s quarterback proceeds to carry Denver to a win over the defending-AFC-champion Steelers with an electrifying 80-yard touchdown TD pass on the first play of overtime. The media coverage is so huge it spills off the sports pages and ESPN and into the front page and cable news. Tebow was everywhere.

The Broncos would fall badly to the Pats the following week. Tebow was abruptly traded to the Jets after GM John Elway made a deal for Peyton Manning. #15 would never really be heard from again after an uneventful season in New York, opting for a small role on ABC’s Good Morning America awhile after being released. He’s now back in the NFL trying to capture a third-string job with the Eagles.

Pre-Trump, Scott Walker was arguably the man to beat for the GOP nomination. Iowa was already practically in the bag, with Walker jumping out to a double-digit lead in the Hawkeye state and no real threat coming from establishment candidates like Jeb Bush. Backers reel off the laundry list: He’s the only guy in the race who won three gubernatorial contests in two election cycles. The Wisconsin governor is a union conqueror and debt dissolver…inherited a huge deficit and made it a surplus. And before running to the comments section and advising putting away the Walker pom-poms, do know my horse was declared in this space back in January. For the purposes of this column, this is simply an exercise of listing why Walker was considered a real contender for the nomination.

But then along came Trump and out came all the oxygen in the room. Some–like Ben Carson, Carly Fiorina, Ted Cruz and the afore-linked John Kasich have been able to find a few bubbles to rise above the GOP frontrunner for long enough to get a rise on the polls, sure. And the one candidate who has absolutely disappeared–and we’re talking Ed Snowden-esque disappeared–it’s been the 47-year-old Walker. And the results have been devastating: An August 12th CNN/ORC poll shows he’s now running a distant third in Iowa (trailing Trump by 13 points and Carson by 5), in a state any and every political expert says he must win or can call it a day. Nationally, Walker is down to six percent support in a Fox News poll released today, his lowest number in over a year.

So what happened? Basically, Walker isn’t flashy. He’s not soundbite-driven in a media culture built around it. His seemingly-perpetual hound dog expression doesn’t result in almost any decent photos of him in terms of displaying intellect or gravitas. Call it shallow or superficial, but like it or not, this stuff matters early on…particularly when being introduced to many voters for the first time.

But is the drop also due to a poor debate performance? Not really. Walker didn’t distinguish nor hurt himself that night and was barely discussed afterward as a result. In the end, perhaps he resembles a classic politician too much, which is not a good thing in this race. Just ask Jeb Bush or Hillary Clinton: This is the anti-establishment race on both sides–at least for now–that craves authenticity, candor and people who aren’t career politicians (the honest Bernie Sanders being the exception because of the stark contrast that is Hillary).

It’s rare to see free-falls reversed in the NFL, even much more rare in politics…particularly with so little oxygen to work with.

If he can’t find a away–and there’s still 168 days until the Iowa Caucus–he’s toast.

Never has someone gone from first to afterthought so quietly.