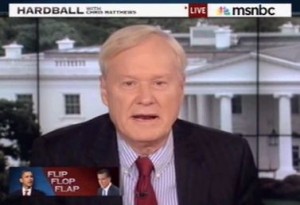 On MSNBC, Chris Matthews opened Hardball on Monday with a discussion of the heavy-handed reframing of President Obama’s campaign against former Massachusetts Gov. Mitt Romney by reelection team officials. The Chicago team is moving from describing Romney as a substanceless, serial office seeker with no values to a secret conservative who has skillfully hid his brand of arch conservatism from voters during the campaign, but is prepared to unleash this terror on an unsuspecting people right after he is inaugurated. No, really. But what is still more laughable in this, well I guess you could call it a strategy, is the Democratic party’s reliance on the same tactic they’ve used on their opposition over the last three years; namely, call them “extreme” and hope it works.

Matthews identified a shift in Democrat’s strategy against Romney, which he says is being quietly led by former President Bill Clinton. He says that the Democrats have dropped the line against Romney that he is a flip-flopper with no core values, and are going with Romney is a shadowy extreme conservative who has been able to mask his conservatism successfully for the last 20 years.

Matthews played a clip of senior Obama reelection advisor David Axelrod to help illustrate how the Obama team’s strategy has evolved: “A lot of Republicans in Congress want to cooperate—know better,” said Axelrod on CNN’s State of the Union this weekend. “But they’re in the thralls of this reign of terror from the far right that has dragged the party to the right.”

Senior White House advisor David Plouffe called Romney the most conservative Republican presidential nominee since 1964 nominee Barry Goldwater. Because, you know, Democrats have been trying to run against Goldwater in every presidential cycle since 1964.

Huffington Post editor and MSNBC political analyst Howard Fineman put the Obama strategy in perspective, saying that it was the White House’s attempt to derail the Romney candidacy by crafting a narrative around him as a ‘flip-flopper.’

“They wanted to emphasize the flip-flop message because they wanted to make the right-wing of the Republican party fearful of Mitt Romney,” said Fineman. “They wanted to sow as much discord as possible – which is why they did it that way. Soon as Romney wraps it up, they move to different strategies.”

Fineman is forced to concede that the tactic really didn’t work, as the discord among Republicans appears to have dissipated nearly as quickly as fast as Romney’s serious opposition dematerialized. So now, the White House is left with the curious condition of combating their own creation – they must now deconstruct the coreless Romney narrative and create a new depiction of Romney as Genghis Khan.

You would think the Democratic party would have abandoned calling Republican’s “extreme” after having been married to that strategy for at least the past two years.

In 2009, mere days after the generally accepted birth of the Tea Party on Tax Day that the Democratic party’s faithful started calling the spontaneous gatherings of anti-tax protesters “extreme.” This piece in the New York Times seems to link the genesis of that line of attack to the Department of Homeland Security’s then-recent warning of raising and dangerous extremism from domestic right-wing groups.

As the 2010 midterm elections approached, that coordinated line of attack was used to paint an entire slate of candidates – hailing from a wide variety of regions with divergent ideological preferences – with the same “extreme” brush. From Florida Sen. Marco Rubio to Nevada senate candidate Sharron Angle; from Illinois Rep. Joe Walsh (R-IL) to Rep. Quico Canseco (R-TX) – no matter how different the candidates were, they were all linked to the new right and were, thus, too extreme.

This strategy was so ineffectual that the Republicans sailed to the largest midterm electoral victory they had seen since FDR’s second term. It was, as Obama put it, a shellacking.

But why abandon such an effective tactic? It was in March of 2011 that a reporter overheard Sen. Chuck Schumer (D-NY) telling an unidentified Democratic messaging specialist “I always use the word ‘extreme.’ That is what the caucus instructed me to use this week.”

…“This week?” This undying line of attack seems to have no expiration date. And now, the Obama reelection team has opted to brush it off and start again: Mitt Romney is a human sleeper cell, poised to unleash his diabolical brand of conservatism on an unsuspecting populace just as soon as he is elected.

Fox News links the new strategy to a cynical campaign tactic Republicans used, unsuccessfully, against Bill Clinton in the 1992 race:

So far, we’re seeing the Obama campaign run very much like the Bush campaign in 1992. The focus is on painting Romney as a secret radical whose personal background should be disqualifying to hold the highest office in the land.

The Obama character attack on Romney has mostly to do with the way the quarter-billionaire made his money and how he has shielded it from taxes. When the Obama campaign asks, “what is Romney hiding?” it means to suggest nefarious doings. The campaign has even invoked the 1983 treatment of the Romney family’s Irish setter on a car trip to Canada as evidence of Romney’s poor character.

Leaving aside the asininity of abandoning a strategy crafted for so long that it has become a meme, only to abandon it as soon as the operating principle no longer applies – and also leaving aside the logistics of convincing a discerning electorate of the secret vile conservatism of a former governor of deep blue Massachusetts – are Democratic messaging firms so bereft of ideas that “extreme” is really all they’ve got?

Watch the Chris Matthews segment below via MSNBC: