Ladies Of The View Are Unanimous: Weiner Is A Distraction That Must Resign Now 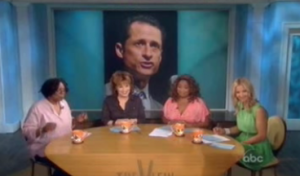 When the liberal Joy Behar and the conservative Elisabeth Hasselbeck are in complete agreement against you, then you know you’re really in trouble. Congressman Anthony Weiner’s ongoing ordeal has united the The View co-hosts, and when you throw in the fact that Whoopi Goldberg and Sherri Shepherd agree with them too, you have a ladies round table that is unanimous: Weiner must resign, and as soon as possible.

Behar actually may have had the harshest comments about Weiner, and definitely the funniest. Behar declared “he is such a narcissict this guy that I’m surprised he doesn’t send pictures of himself to himself.” Hasselbeck was disgusted that Weiner “is so self-empowered that he thinks it’s actually good enough that he said ‘I’m sorry'” without going further and actually resigning. Behar concluded:

“I think he should resign. He’s a distraction . . . he’s distracting everybody from the issues. Get out now Anthony – out!”

Whoopi was a bit more light-hearted, saying about this scandal “it’s not Republicans, it’s not Democrats, it’s just dummies” and expressing shock at reports suggesting the Congressman’s wife was “sticking by her Weiner.” If Behar was married to him, she wasn’t shy about what her reaction would be to the “jerk,” promising “I would have dropped him like a hot rock.” With the The View co-hosts so readily throwing Weiner overboard, might Weiner be thinking “If I’ve lost the ladies of The View, I’ve lost America?”