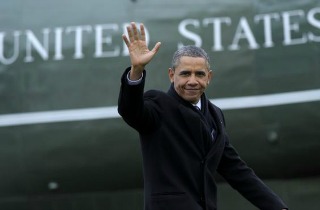 The political headlines of late February, 2014 have perhaps been the cruelest to President Barack Obama as any since those of mid-October, when the Affordable Care Act’s debuted to largely unflattering reviews. But Obama is not fighting tangible events that the White House can frame and shape with rhetoric and gestures. Instead, the White House is battling perception — a far more abstract phenomenon. And voters’ perceptions of Obama’s presidency are not good.

“Amid continued pessimism about the economy and direction of the country, 59 percent of Americans say they are disappointed in Mr. Obama’s presidency (including 37 percent who are very disappointed),” CBS News reported on Wednesday. The latest CBS News/New York Times poll found that only 41 percent of American adults approve of the job the president is doing in office, down from the 46 percent approval CBS registered in mid-January.

The bad news continued for the president further down that poll. 42 percent of registered voters in that survey say they will back a Republican candidate for federal office in November. Only 39 percent said they would head to the polls to vote for the Democratic candidate.

The New York Times is perplexed. “Republicans are in a stronger position than Democrats for this year’s midterm elections, benefiting from the support of self-described independents, even though the party itself is deeply divided and most Americans agree more with Democratic policy positions,” read the lead paragraph in their write up of that troubling poll.

The Republicans are set to maintain control the House and make big gains in the Senate in November. How big? While the Senate is in play in the coming election cycle, some analysts are beginning to entertain the prospect that Republicans may make gains large enough to allow them to keep control through the 2016 cycle – a presidential year when the GOP must defend the seats it gained amid a pro-Republican wave in 2010.

University of Virginia’s Center for Politics analyst Alan Abramowitz painted a dismal picture for Democrats on Thursday. “Even if Democrats have a 10-point lead in generic ballot polling in early September, Republicans would still be expected to gain between three and four Senate seats because of the GOP advantage on the seat exposure and midterm party variables,” he wrote. “[A] Republican lead of five or more points would almost ensure a GOP majority in next year’s Senate.”

RealClearPolitics analyst Sean Trende took a less conventional approach to estimating potential GOP Senate gains. Last Thursday, Trende published a post in which he said that Republican gains in the Senate will track closely with President Obama’s job disapproval rating. He wrote that, at Obama’s present 41 percent rating, gains of between 10 and 11 seats in the upper chamber of Congress are not out of the question.

An 11 seat gain would mean the GOP would hold 56 seats in that chamber of Congress – a feat the party has not duplicated since the election of Herbert Hoover in 1928.

It’s that bad, and Obama apparently knows it. This week, the President of the United States began to tout his plans for the post-presidency. Amid a contentious election year in which the fate of his signature policy achievement, the Affordable Care Act, hangs in the balance, Obama has set his sights on the impact he can make once he vacates the Oval Office.

On Thursday, White House advisors mounted a press blitz in which they said that Obama will expand his “My Brother’s Keeper” initiative, a program which will bring together non-profit foundations and private enterprises to test programs designed to help young minority men to graduate from high school, train for a good job, and avoid juvenile detention centers or prison. Watch below:

“Senior White House aides confirm to Yahoo News that a major focus of Obama’s post-presidency will be a broad-based, lifelong effort to lift up a demographic that feels perennially written off and left behind,” Yahoo! News’ Liz Goodwin and Garance Franke-Ruta reported on Wednesday. “Obama, who wrote a best-selling memoir probing questions of race, identity and his own fatherlessness, is plotting a return to the issues that have been central to his own life and will continue to shape generations of young black men after he leaves the White House.”

This is a critical cause, and the president’s influence will be valuable to helping minority youth to navigate the challenges posed by growing up in troubled neighborhoods. Obama’s post-presidency already seems bright. So bright, in fact, that the president apparently cannot wait to get started.

Given the dip in his approval rating and the increasing likelihood that the final two years of the Obama administration will be unproductive due to the potential for a Republican dominated Congress, Obama is already embracing his lame duck status.

Obama’s embattled congressional allies must be deeply concerned about the president’s focus on life after elected office. Many of them should probably being to consider following his lead.