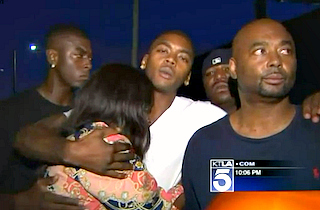 A 25-year-old man identified by news agencies as Ezell Ford was shot and killed by the LAPD Monday night. According to his family, Ezell, who they say had special needs, was complying with police orders and lying on the ground when officers opened fire.

The incident occurred when officers conducted an “investigative stop” of Ezell, who was walking along a street near his home. Officials said a struggle ensued, potentially involving an officer’s weapon, during which Ezell was shot three times. He died of his injuries at the hospital a short time later.

A woman who identified herself as Ezell’s mother told KTLA that Ezell was lying on the ground when police shot him, a claim repeated by witnesses at the scene who said they were Ezell’s relatives.

“They laid him out and for whatever reason, they shot him in the back, knowing mentally, he has complications,” reported a man who said he was Ezell’s cousin. “The excessive force…there was no purpose for it. The multiple shootings in the back while he’s laying down? No. Then when the mom comes, they don’t try to console her…they pull the billy clubs out.”

The LAPD is conducting an investigation of the shooting, and the officer involved has been placed on routine leave.

Ezell’s death follows the shooting of Michael Brown in Ferguson, Mo., which has become the site of protests and riots over police action.

Watch the clip below, via KTLA: