Larry Elder Explodes At Piers Over Zimmerman: You’re Condescending, ‘Stupid,’ Should Be Ashamed Of Yourself!
video

Larry Elder Explodes At Piers Over Zimmerman: You’re Condescending, ‘Stupid,’ Should Be Ashamed Of Yourself! 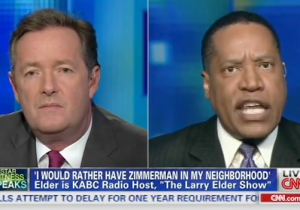 Piers Morgan clearly has no qualms about inviting people on his show who fiercely disagree with him or even attack him personally, and tonight’s opening interview with radio host Larry Elder did not disappoint. Elder told Morgan his interview with George Zimmerman trial witness Rachel Jeantel was horrendous and “condescending,” and even told Morgan that he was being “stupid” for his assessment of Jeantel’s character.

On Tuesday, Elder sent out a series of angry tweets about Morgan’s interview with Jeantel, beginning with this one.

Elder went on at length about underreported crime in Chicago, which Morgan agreed with, but he kept going on, even calling Morgan a “bleeding heart liberal,” until Morgan nearly shouted, “If I could just get a word in, that’s be great.” He attempted to call Elder out for “ridiculous things” he said about Jeantel, but Elder went on the warpath again, leading Morgan to remark he’s not in a competition for the “greatest filibuster in my show’s history.”

Morgan pressed Elder on whether he thought Jeantel was “stupid,” but Elder repeatedly dismissed the question and continued complaining about the myriad attention the trial’s been getting. When Morgan said Zimmerman’s getting away with no punishment, Elder loudly contradicted him, saying “He’s a marked man!” and “He will never have a moment of peace!” Morgan shot back that at least Zimmerman can walk away alive, unlike Trayvon Martin.

They also got into a back-and-forth about Zimmerman himself, after Elder asserted that he’d want more Zimmermans in his community to prevent more Ariel Castros. Morgan shot back that he has teenage sons and thus wouldn’t like the idea of Zimmermans patrolling the streets, but Elder just snarked at Morgan that he lives in a gated community so he doesn’t have to worry about that anyway.

Morgan attempted to call out Elder for questioning Jeantel’s intelligence, grilling him about her educational background as opposed to his. Elder told Piers that he shouldn’t be “treat[ing] black people like children,” and went on another tangent in which he scolded Morgan, saying, “You ought to be ashamed of yourself!”

Elder insisted he never called her stupid–that was Morgan’s word–and continued to lecture Morgan about the real problems in the black community that the media has no interest in talking about.

UPDATE: And to really convey just how insane this interview got, here’s what Morgan tweeted after it aired.

Watch the full, gut-wrenching interview below, via CNN: