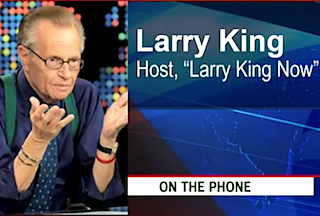 Larry King has not been shy when it comes to sharing his opinions on the man who replaced him at 9pm on CNN. Just last month, he was criticizing Piers Morgan for making his show “too much about him” and not enough about the people he interviews. Today, King told Newsmax’s Steve Malzberg that CNN’s problems go beyond just Morgan, to the point where the network no longer has “appointment viewing.”

“They don’t have a lot of appointment viewing,” King said of CNN, citing his own long-running Larry King Live as the type of show the network is now missing. He called Wolf Blitzer a “wonderful anchor” and suggested Chris Cuomo would be better off in prime time, but in general he does not see great things coming out of his old home.

“CNN is in the middle,” King said. “When a big story breaks, CNN gets viewers, but you don’t get a big story every day.”

UPDATE (7:20pm ET): Piers Morgan, who evidently heard King’s latest comments about CNN sent out the tweet below, politely asking him to “stop bitching incessantly” about the network:

Hey @kingsthings – show some respect, and stop bitching incessantly about CNN. Thanks.