King Takes A Swipe At Piers: Show Is Just As Much About Him As It Is About Guests
Twitter share button 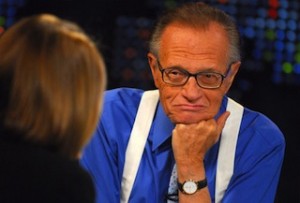 Since his start at CNN two years ago, Piers Morgan has become one of the most outspoken and confrontational primetime TV hosts, a particularly interesting feat considering his show is on CNN. You’ll recall that before Morgan was on CNN, in his current timeslot was a soft-spoken Larry King, who never made it a habit of challenging his guests too much. In an interview with HuffPost Live, King said of his successor’s program that the show is “a lot about him as much as the guests.”

RELATED: Larry King To Piers Morgan: If You Say “I’m Dangerous,” You Better Be Dangerous

For better or worse, Morgan became the story in the midst of the gun control debate being waged across television since the Sandy Hook shooting, and has, a number of times, called for stricter gun control laws. King, who currently hosts a Hulu web show, explained how his style differs from Morgan’s.

He’s very different from me. I never gave opinions. Piers gives his opinions. The show is a lot about him as much as the guests. I used to make the guests the star of the show…He’s so different from me, it’s very hard to compare styles I think. I just, I don’t work that way.

King acknowledged that there is a place in cable news for asking probing questions of an interview subject, but ultimately it’s not about them, and when “you turn on a show, any show, and… half the time the host is talking, something’s wrong.” King said he has always believed that “I never learned anything when I was talking.”