Larry Summers On This Week: ‘I Serve At His Pleasure’
video

Larry Summers On This Week: ‘I Serve At His Pleasure’ 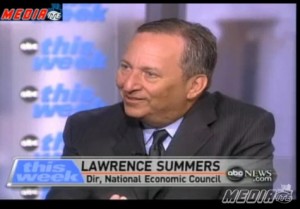 Today, This Week guest host Jake Tapper asked Obama economic adviser Larry Summers if there was anything to rumors of his departure from the administration. Summers’ response touched off a pop-cultural battle between my inner West Wing cast, and the Beavis & Butthead that lives in all of us.

“I serve at the pleasure of the President” is like Pavlov’s bell for liberals, and other devotees of the sadly fictional Bartlett administration. However, string that together with “I’m having an enormously satisfying experience,” and you start to veer into chuckle-worthy, “Did somebody order a pizza?” territory.

On the substance, though, the rest of Summers’ interview was spot-on. He touted March’s encouraging job creation, while keeping a lid on expectations. Perhaps more encouraging was former Fed chairman Alan Greenspan‘s assessment that the economy is “gathering momentum,” and that a double-dip recession is now highly unlikely. Greenspan’s no Pollyanna, so it means a lot more coming from him.

Politically, the question now seems to be whether the slow move into recovery will be enough to help Democrats in November. The conventional wisdom, buoyed by recent polls, says it won’t. However, if the Democrats play their cards right (a big if), they could benefit from the same “you don’t switch horses in midstream” logic that buoyed President George W. Bush to a second term.

During the Roundtable, Tapper cited a poll that shows Americans trust Republicans slightly more on economic issues, a notion that Democrats need to dispel. In this case, though, the wise move is to wait a few months to press their advantage. Right now, the Republicans are busy undercutting the significance of the March numbers. Dems should let that sink in for a while, see how April and May go. If this summer is anything like last summer, that’s when they should turn up the heat.