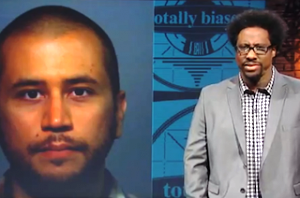 W. Kamau Bell, who hosts the weekly late night show show Totally Biased on FX, shared his thoughts on the first few days of the George Zimmerman murder trial last night and refused with withhold judgement. While potential jurors in the case will need to hear arguments from both sides, Bell took the facts as he sees them and denounced the defendant as a “racist, child-killing coward.”

“Jury selection began this week in the trial of alleged murderer and definite racist George Zimmerman,” Bell began, before showing who he would put on the jury if it were up to him. “Of course I’m a supporter of fair trials,” he said, “but if there’s any god in heaven–and I’m pretty sure there isn’t, here’s who would be deciding Zimmerman’s fate.” The list included everyone from Chuck D. to “Fat Al Sharpton” to four different versions of Samuel L. Jackson. 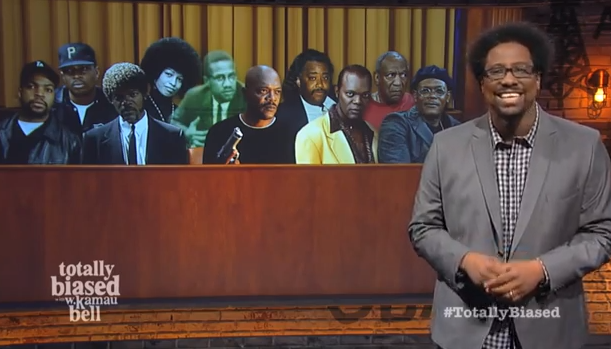 Noting that Zimmerman’s defense team have requested that certain “inflammatory” phrases like “vigilante” and “profiling” be left out of opening statements in the case, Bell went on to deliver his own assessment of the defendant using as many inflammatory words as possible.

“George Zimmerman, you are a profiling, vigilante, racist, right-wing, trigger-happy, child-killing coward. I want to rip off your nuts, shove them down your throat, pull them back out your ass, toss them like dice, roll a hard six, pick them back up, put them in a blender, make a nut smoothie, drink it all down, feel refreshed, piss it back out, take off your shirt, wipe it up, wash your shirt on high–oh, it’s gonna shrink–put the shirt on a dog, call that dog a cat, laugh at your cat-dog, drop you both off at a Crip cook-out in Compton!”

At that point, the camera cut to Bell’s executive producer, Chris Rock, who laughed, saying, “This guy’s good, we should give him a nightly show this fall. Oh yeah, George Zimmerman can eat a dick.”

Bell’s show has aired weekly since its launch last summer, but starting this fall, it will be on every night at 11pm, in direct competition with The Daily Show.

Watch video below, via FX: