Late Night Ratings Watch: Fallon and Kimmel Up, Letterman Back Down 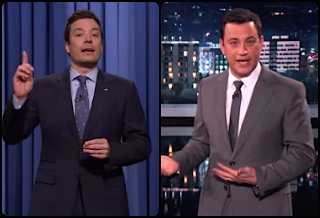 The small surge in ratings that David Letterman experienced the week he announced his retirement mostly disappeared last week with The Late Show dropping from 3.148M to 2.849M total viewers. The show’s 18-49 demo rating also decreased slightly from 0.63 to 0.57. But it was enough to keep Letterman ahead of Jimmy Kimmel Live!, which placed third in total viewers with 2.715M. And for the eighth consecutive week since it launched, The Tonight Show Starring Jimmy Fallon was #1 in both total viewers (3.916M) and the demo (1.18).

Jimmy Fallon even managed to increase his total viewers by about 2% from the week before, and while his 1.18 demo rating matched the previous week, it marks increase compared to be Jay Leno received in the same week last year (0.83).

Perhaps helping out Fallon was the fact that Letterman’s show was delayed due to sports coverage on three of the week’s five nights and Jimmy Kimmel aired a rerun on Friday night. All three shows have been on hiatus this week, but Kimmel returns tonight for a special show following the Scandal finale on ABC. Speaking of Kimmel, he was the big winner online, racking up more than 6 million views by sending rapper Drake out onto the streets of LA in disguise.

Here’s the breakdown for the week of April 7-April 11, 2014, according to Nielsen’s “live plus same day” data:

And, since today’s late night viewers are not only watching on TV, here’s a look at the most popular video for each of the three shows last week on YouTube (as of Thursday, April 17th):

In the 12:35pm slot, Late Night with Seth Meyers was up slightly compared to the previous week to 1.633M total viewers, though down slightly in the demo to 0.56 rating in the 18-49 demo. Meanwhile, CBS’ Late Late Show with Craig Ferguson was up for the second consecutive week to 1.558M total viewers and 0.43 in the demo. If the trend continues and Ferguson manages to surpass Meyers, perhaps CBS will think harder about keeping him in his current slot next year following Stephen Colbert.