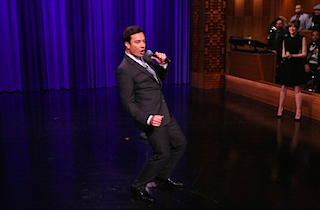 Of the three big network late night shows, The Tonight Show Starring Jimmy Fallon saw the biggest increases in ratings last week, jumping up 13% in total viewers to 3.787M and up 17% in the 18-49 demo to a solid 1.23 rating, enough to match The Late Show with David Letterman and Jimmy Kimmel Live! combined. The numbers marked Jimmy Fallon’s highest ratings in five weeks.

While David Letterman remained in second place in total viewers, Jimmy Kimmel saw treated week-to-week increases. The ABC show was up nearly 12% compared to the previous week to 2.777M. In the demo, Kimmel remained ahead of Letterman, rising a full 20% to a 0.68 rating.

On the YouTube front, Fallon also was a clear winner for the week, drawing more than 16 million views to his lip sync battle with Emma Stone. During the same period, no video on Kimmel or Letterman’s YouTube pages managed to crack the 500,000 view mark.

And, since today’s late night viewers are not only watching on TV, here’s a look at the most popular video for each of the three shows last week on YouTube (as of Thursday, May 8):

In the 12:35pm slot, Late Night with Seth Meyers increased to 1.697M total viewers and a 0.61 rating in the 18-49 demo compared to the previous week. Renewed interested in CBS’ Late Late Show was limited following the announcement that Craig Ferguson will be leaving the show later this year. His ratings were up a bit to 1.420M total viewers and 0.36 in the demo, but still trailed Meyers significantly.