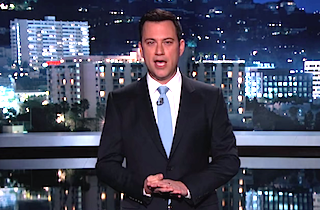 In a week that saw all three network late night shows’ ratings drop, Jimmy Fallon maintained his top spot while Jimmy Kimmel took the #2 spot in total viewers for the second consecutive week, besting his childhood idol David Letterman was came in third.

Fallon’s Tonight Show was down about 11% after topping four million the week before, while Jimmy Kimmel Live! dropped just over 12%. The Late Show lost less than 2% of its audience from the week prior, but that was not enough to keep it out of third place. Similarly, in the demo, both Fallon and Kimmel lost points but remained above Letterman.

Buoyed by the NBA Finals on ABC, Kimmel also had a viral hit on YouTube with his NBA edition of “Mean Tweets,” which has amassed nearly 5 million views. But that couldn’t touch Fallon, who had multiple videos with more than 5 million views. Taking the top spot was his ride on a roller coaster with comedian Kevin Hart.

And, since today’s late night viewers are not only watching on TV, here’s a look at the most popular video for each of the three shows last week on YouTube (as of Thursday, June 26):