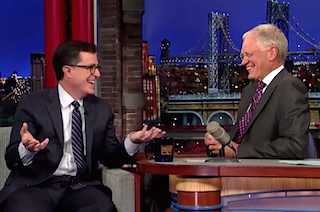 After a week-long hiatus, the three major network late night shows returned last week to all-around lower ratings than they were seeing before the break. Of the three, only The Late Show with David Letterman managed to hold relatively steady, losing less than 2% of its audience two weeks prior for an average 2.807M viewers . This was partly thanks to Letterman’s successor Stephen Colbert, who dropped by the CBS show last Tuesday night and helped lift David Letterman over Jimmy Fallon in total viewers, at least for one night.

While staying in first place, The Tonight Show Starring Jimmy Fallon saw the biggest drop of the three, down 14% from two weeks earlier to 3.358M. Remaining in third place, Jimmy Kimmel Live! was down a more modest 8% to 2.487M. In the 18-49 demo, all three shows were down from where they stood two weeks prior, with Fallon nearly beating Letterman and Jimmy Kimmel combined.

On YouTube, Fallon was also a clear winner for the week, with his latest Brian Williams rapping video topping 8 million viewe. In the same week, no video on Kimmel or Letterman’s channels broke the 1 million mark.

And, since today’s late night viewers are not only watching on TV, here’s a look at the most popular video for each of the three shows last week on YouTube (as of Thursday, May 1):

In the 12:35pm slot, Late Night with Seth Meyers was down a bit compared to two weeks ago to 1.511M total viewers, though up slightly in the demo to 0.57 rating in the 18-49 demo. Prior to the announcement that he will be leaving CBS’ Late Late Show later this year, Craig Ferguson was down significantly to 1.360M total viewers and 0.33 in the demo. Unlike Letterman, who did see a bump in ratings after he announced his retirement, so far it appears that this week Ferguson has not seen any significant increase in his numbers.

Previously: Late Night Ratings Watch: Fallon and Kimmel Up, Letterman Back Down