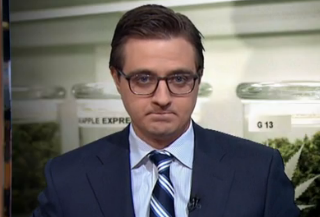 When reporting on a TV personality possibly getting the boot from their network, it’s par for the course to request for official comment on the matter. When you do this long enough, you begin to notice some patterns as it pertains to certain networks. In the case of MSNBC (and NBC News in general), I think I’ve found — as they say in poker — their tell.

A tell, of course, is that trait or sign in regard to the poker hand they hold. Is that person bluffing? Doesn’t he have a straight flush? A tell — as seen in the classic Rounders with Matt Damon and John Malkovich as the great Teddy KGB — can make or break who wins the pot. With MSNBC, I first noticed its tell following my original exclusive about the demise of Ronan Farrow’s daytime show.

To review, when asking if the network was planning on cancelling the ill-fated program for the 26-year-old Cronkite Award Winner, the answer was the following: “No. We’re fully committed to Ronan.”

So, I took that as a standard denial without reading between the lines too much. But in retrospect, the tell is obvious: Being fully committed to Ronan is one thing, being fully committed to his program is quite another. Network spokespeople are meticulously trained in this stuff and, in this case, thought of that response very carefully before replying. The language specifically engineered so that if I went back to them now and called them out, they can always say, “Hey, we never said we were committed to the show, just committed to the host staying on at the network in a different capacity,” or something to that effect.

Fast forward to last week and the announcement around the aforementioned Farrow and Joy Reid‘s respective 1:00 and 2:00 p.m. ET programs being cancelled. Not a big surprise given the anemic numbers — even by MSNBC standards. But the bigger story to emerge was that the network is eying Chris Hayes as well, who isn’t exactly killing it at 8 p.m. (the most important time slot out there), falling to third and sometimes fourth place behind HLN’s Forensic Files repeats.

Any objective media critic or fan will tell you Hayes isn’t a primetime host (he was great on weekend mornings in his old Up spot, where his style, pace and topic selection was and would be a better fit) — and that reportedly includes Griffin, who made the big bet (at the reported behest of Rachel Maddow) on Hayes and is seeing very little return on investment.

All of that said, when asked if the network planned to cancel Hayes following the report in The Daily Beast, here was the response below from an MSNBC spokesperson: “Contrary to the rumors from unnamed sources, we have no plans take Chris Hayes’ show off the air or move Rachel Maddow’s show.”

Given the Farrow example, you see the tell, right? No plans to take Chris Hayes’ show off the air will likely mean not taking it off entirely, but instead moving it to a different home out of primetime. Or no plans could be flackese for no finalized plans at this exact moment in time.

This isn’t the first time NBC has gone this route either. Just think back to the time the network denied that Ed Schultz was being removed from weekday primetime to a weekend slot (Hint: It happened, despite denials). Or the times NBC News repeatedly denied the ousting of David Gregory from his moderator spot on Meet the Press (Hint: He did). Or Ann Curry being safe on the Today Show (Yeah, you get the idea).

Of course, this just doesn’t pertain to MSNBC, but all networks trying to hang on and control the narrative after word is leaked of a program’s or personality’s impending doom.

But given his network’s track record, if I’m Chris Hayes, I see the tell and start looking forward to getting my weekday dinner time back with the wife and kid again soon.