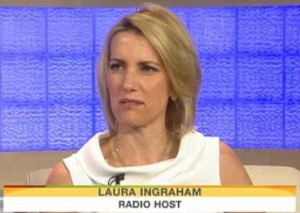 Conservative commentator Laura Ingraham appeared on The Today Show and shared with Matt Lauer her disappointment with the state of culture in America today and apparently doesn’t think that Lauer’s show is helping. By featuring such singers in their Summer Concert Series like Cee Lo Green and Enrique Iglesias, with the songs “[Blank] You” and “Tonight I’m [Blanking] You,” respectively, Ingraham believes that the Today Show and Lauer in particular, might need a “cultural intervention.”

Before talk turned to culture, Lauer and Ingraham sparred over the debt ceiling with Ingraham adamantly saying “I certainly hope [Republicans] don’t compromise on taxes.” Lauer wondered where was the “shared sacrifice” on the Republicans side if they don’t compromise? Yet Ingraham responded, “is [Obama’s] shared sacrifice the fact that he cancelled his Montana vacation last weekend?” Instead she repeated “we have to shrink government” and predicted that “Democrats are in big trouble” if a deal is not reached.

The conversation turned a bit lighter when Ingraham talked about her new book, Of Thee I Zing as Lauer wondered, “am I the only man in America or person in this room who didn’t know what a ‘muffin top’ was?” For the uninitiated, here’s your chance to share with Lauer this new knowledge. Then Ingraham discussed “porn on a train” and suggested “we can do better” than to have Lauer feature all these singers with explicit lyrics on the Today Show. Instead, Ingraham is in favor of more Tony Bennett. At this point Lauer learned it was better to laugh off the criticism than to argue, and humorously concluded, “thank you for going to our website and checking out our Summer Concert Series” and suggested Ingraham get the App for her phone too.