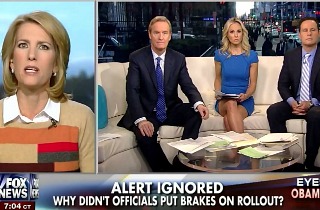 Conservative radio host Laura Ingraham joined the hosts of Fox & Friends on Tuesday to weigh in on recent revelation that the White House had months of forewarning that the Affordable Care Act website would not function in time for its October launch. When asked why the Democrats and President Barack Obama could not accept the delay in the law’s implementation, something the GOP demanded during the government shutdown, Ingraham replied that it was “because they’re fanatics.”

Steve Doocy began the segment by noting that congressional investigators have uncovered a report crafted and presented in early spring which showed that the website was plagued with problems and was headed for a rocky public debut.

Doocy said a number of administration officials were briefed on the website’s status. “They all knew,” he reported. “Do you think they told the president, or was he completely oblivious?”

“You need a quarterback for a project like this,” Ingraham observed. “It wasn’t Kathleen Sebelius. She clearly was not doing due diligence necessary or she was so committed to that deadline of October 1, they were just – no matter what, this thing is launching.”

“There’s more dysfunction in this White House than I think we even know about now,” she continued.

Elisabeth Hasselbeck played a clip of the president telling reporters on Thursday of last week that he was not “informed correctly” of the problems associated with the site prior to its launch.

“If they knew this and had this briefing in April-slash-May, why wouldn’t they take the Republicans offer of a delay in September and, with a wink and a nod say ‘This is exactly what we were hoping for?’” Brian Kilmeade asked.

“They’re fanatics for redistributing wealth,” she added. “A deadline is going to be met come hell or high water.”