Laura Ingraham Flips War On Women On Democrat’s Fear Of Gun-Wielding Co-Eds: ‘Where Are All The Feminists?’
video

Laura Ingraham Flips War On Women On Democrat’s Fear Of Gun-Wielding Co-Eds: ‘Where Are All The Feminists?’ 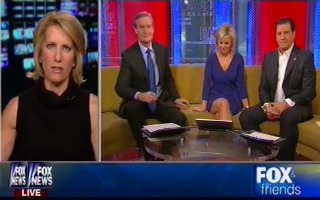 Conservative radio host Laura Ingraham took on statements made by Democratic Colorado state Rep. Joe Salazar on Tuesday’s Fox & Friends. She went after Salazar for saying that women armed with concealed firearms are likely to “pop a round” at individuals that they may find threatening. Ingraham was outraged by the politician’s statement, and wondered why there was not a clearer reaction coming from women’s rights groups over what she considered Salazar’s ill-informed comments.

RELATED: Dem State Rep.: Women Might ‘Pop A Round’ If They Think They’re Being Raped, So We Must Ban Concealed Carry

After playing the clip of Salazar’s floor speech, Ingraham asked the Fox hosts to recall the scandals around statements made by Republican senate candidates Todd Akin and Richard Mourdock.

“What about this?” Ingraham asked. “A man talking about how a woman can best defend herself – first of all, he can’t even speak grammatically; number one. Number two; he’s channeling what might happen during an attack of a 200 pound man versus a 110 pound woman. I suggest one thing to Mr. Salazar: why doesn’t he try this first?”

“He did apologize,” noted Gretchen Carlson.

“For all the women out there listening – I don’t care if you are a Republican or a Democrat – if you are vulnerable to attack, and someone is coming at you, and you are well-trained in firearms use, you will have a much better chance of surviving, not being raped – and your children not being attacked as well, or hurt,” Ingraham declared.

“That man should never work in politics again with that statement – it’s an outrage,” Ingraham concluded.