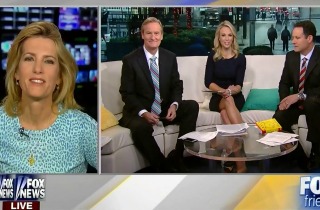 On Tuesday, conservative radio host Laura Ingraham joined the hosts of Fox & Friends to preview the political debates of the week. Ingraham and the hosts agreed that the president and his allies were going to attempt to shift the national conversation away from health care and toward more favorable terrain like the coming urge to address “income inequality.” Ingraham was not worried, though, and said that this was an issue that the Republican Party could easily deflate.

Elisabeth Hasselbeck opened the segment by declaring that President Barack Obama will spend as much time as he can attempting to shift the public’s anger away from health care and toward structural inequality.

“We’re set to hear rage against the machine, but isn’t he the machine?” Hasselbeck asked.

“The railing against Washington five years into your administration,” Ingraham replied, “it’s like – newsflash; I know you were in Hawaii for almost three weeks, but you are Washington.”

She added that Obama has not moved on job creating programs like the Keystone XL Pipeline, which undermines his message about income disparities. “All of this happens under his watch and his guidance, yet it’s the Republicans’ fault we have really rich people, really poor people, and a shrinking middle class?” Ingraham asked.

“The good thing about this is that if Republicans get their act together and actually have a coherent message, they can really swat this away quickly,” the talk radio host declared. She said that the GOP can attack Democrats for their own attack on the middle class by going after them for the push to create a pathway to citizenship for illegal immigrants.