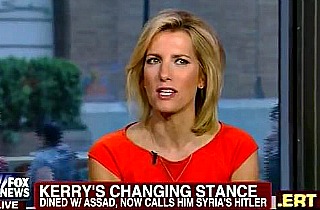 Conservative radio host Laura Ingraham attacked neoconservative Republicans in the harshest of terms on Tuesday’s Fox & Friends. As a former Iraq War supporter, she said that there is no reason to support intervention in Syria. Ingraham blasted some in the GOP for supporting “another ill-conceived, undefined war,” and added that the Iraq War regrettably paved the way for President Barack Obama to assume the presidency.

“We have a current weapon of mass destruction in this country,” Ingraham began expressing her opposition to intervention in Syria. “It’s called unemployment.”

“I was one of the most vociferous supporters of the Iraq War,” Ingraham continued. “That strengthened Iran’s hand.”

“In the last 10 years, we’ve gotten involved in two major military actions,” she said. “Our country is poorer, we have more unemployment, we have Barack Obama as president. We wouldn’t have Obama as president, sadly, if we didn’t go into Iraq.”

“The Constitution is very clear: there is not a blank check for any executive, Republican or Democrat, to bring the country into another ill-conceived, undefined war,” Ingraham declared.

Ingraham said that military experts she speaks with cannot identify a strategy that would change the situation on the ground in Syria.