Laura Ingraham: Maybe We Should Have Focused More On Patriot Act, Not ‘Laughed Off’ Civil Libertarians
video

Laura Ingraham: Maybe We Should Have Focused More On Patriot Act, Not ‘Laughed Off’ Civil Libertarians 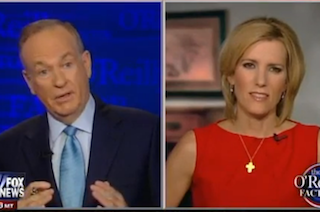 Addressing the NSA’s phone data grab on Bill O’Reilly’s show Thursday night, Laura Ingraham strayed into rethinking the haste with which the Patriot Act was passed in 2001.

“To be fair on the surveillance deal,” O’Reilly admitted, “it started under the Bush administration, apparently. It has continued and expanded under President Obama, with 121 million Americans being a part of Verizon deal. All our records are in the hands of the government. As we see in the IRS, anything can be leaked out to anybody. So maybe they didn’t listen to the calls, but they know who you called and how long you were on the phone with that person. That could be put out to any website any time they want.”

“It all started courtesy the Patriot Act,” Ingraham said. “A lot of civil libertarians at the time raised red flags, and they were laughed off. I didn’t focus that much, to tell you the truth, about the Patriot Act. I wish I had. I think that was a mistake.”

O’Reilly was quick to separate his support of the Patriot Act, which covers the NSA’s data grab revealed yesterday, from the Obama’s administration’s use of it. “I supported the Patriot Act, but I never thought that a warrant could cover every single American,” he said.

“We never think,” Igraham said. “The key thing is the FISA court is the Foreign Intelligence Act. Now it’s domestic.”

“You can go get the records of everybody!” O’Reilly said. “That I never even thought to be possible.”

“And there was no specific reason to target people,” Ingrahma said. “I believe that’s different from how the Bush administration approached it. We’ll see.”