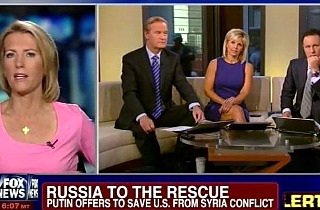 Conservative radio host Laura Ingraham expressed skepticism about the so-called Russian solution to the crisis in Syria. She said that she was not certain that the offer to monitor the surrendering of Bashar al-Assad’s chemical weapons into international custody will resolve the crisis. Furthermore, Ingraham said, President Barack Obama, given his background as a “community organizer,” appears incapable of managing America’s affairs abroad.

“The bottom line is the president has an escape hatch, right?” Gretchen Carlson asked.

“We’ll see,” Ingraham replied. She said that Sec. John Kerry “stumbled” into allowing the Russians to embarrass Washington and boost their own stature by making it appear as though Kerry’s off-the-cuff hypothetical was a real policy proposal that Moscow could facilitate.

Brian Kilmeade noted that even the State Department attempted to walk back Kerry’s accidental policy proposal before it was embraced as a path to peace by the White House.

RELATED: Obama’s Craven Embrace of ‘Accidental Diplomacy’ to Save His Presidency

“This is an example of what happens when a community organizer, who is used to doing the razzle-dazzle with Oprah and all of his celebrities, thinks by just through the sheer force of personality and magnetism he can somehow change the chess pieces on the board,” Ingraham later said.

“When you’re dealing with someone like Russia — it’s a great world power, even with all of the struggles — or China, this is not something that you can just stumble into,” she insisted. “This is something that has to be incredibly well thought out and from the beginning. It was not.”

Ingraham insisted that she did not think the Russian solution would save Obama from a political defeat, and that he “looks ridiculous” pursuing it.