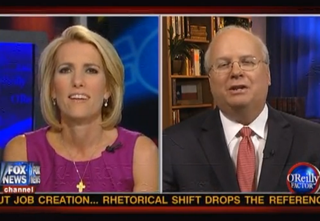 The rumored tension between Texas Governor and Republican presidential candidate Rick Perry and the the last man to hold both titles simultaneously, President George W. Bush, has made for plenty of headlines– a tension around with many in the Bush camp have been implicated. Hosting The O’Reilly Factor tonight, Laura Ingraham got to speak to one of those in the Bush camp, Karl Rove, and drilled him on the relationship between two of his former candidates. Rove was not too happy to be addressing the rumors.

Ingraham had Rove on to assess the 2012 Republican race on the eve of tomorrow’s debate in California, which he contended was mostly up for grabs between Rep. Michele Bachmann, Perry, and Mitt Romney. Arguing that her listeners would let her have it on the radio tomorrow if she didn’t ask, Ingraham put the question out there: “What is it with you and Rick Perry? Is this some old animosity? Is it some Texas thing?”

“You’re asking the wrong guy!” Rove responded, adding that Perry “has been nothing but very kind to me,” and that their relationship was so deep and long-lasting that “I was one of the two guys that sat him in a room and convinced him to be a Republican.” Ingraham then asked whether Rove considered Perry ungrateful to the Bush camp for kickstarting his political career, to which Rove responded that “all I’ve seen between the two men is graciousness.” He then cited an article in Time by Mark Halperin that claimed “the two men have never been close.” “I know that not to be true– they’re very close!” he declared emphatically,” chiding the sources used in the piece for what he seemed to consider an attempt to hurt Perry: “I don’t know why they’re doing this.”