Laura Ingraham: “The Left Has Never Been About Free Speech, Unless You’re Maybe A Pornographer” 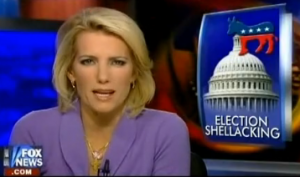 There’s a new candidate for most absurd and hyperbolic statement of the week: Laura Ingraham‘s blanket statement about liberals’ supposed hatred of free speech. Ingraham was inspired to say what she did on last night’s O’Reilly Factor, during a conversation about recent comments made by Al Sharpton and Senator Jay Rockefeller.

Ingraham introduced the clips of Sharpton and Rockefeller by saying that they were evidence of the “far left” trying to get revenge on the right for what happened in the midterms. She then showed Sharpton opining about the FCC, saying that the organization should “deal with standards on how they give station clearances to people that just want to race bait. This is not about opinions… this is on federally-regulated airwaves.” Sharpton’s comments came in response to Rush Limbaugh’s recent racially charged comments about President Obama (to recap: Obama is “a juvenile delinquent,” “graffiti on the walls of American history,” and his administration is a “gang”).

Ingraham then turned to a clip of Senator Rockefeller from a November 17 congressional hearing, in which the Democrat from West Virginia said, “I hunger for quality news. I’m tired of the right and the left. There’s a little bug inside of me which wants to get the FCC to say to Fox and to MSNBC, ‘Out! Off! End! Goodbye!'”

Ingraham interpreted Rockefeller’s remarks as a direct call to shut down Fox (and Fox alone, apparently—it wasn’t until the end of the segment that she acknowledged Rockefeller had also castigated MSNBC). And why, according to Ingraham, do liberals want to shutter her network? Because “it’s popular, it has huge ratings, it’s got great personalities—and obviously, people like it.”

One of The Factor‘s guests, Steven Hayes of The Weekly Standard, agreed completely with Ingraham’s assessment. He also called Rockefeller’s remarks “outrageous,” since he thinks Rockefeller has no license to “lecture us about proper political discourse”:

“If you go back and look at the things he has said over the years, where he has directly contradicted things he has said before, misrepresented himself several times on several different occasions, including national security—this is one of the last people in America who should be lecturing anybody on political discourse.”

Ingraham then turns to Doug Schoen, author of a book about the Tea Party and a former adviser to President Clinton. “We always get to this point,” she said, “when conservatives are making inroads politically or culturally—the left, instead of making the substantive argument, trying to defeat them substantively, they’re always, ‘Oh, let’s get the fairness doctrine! Let’s get them off the air!” …It’s a Stalinist and a subjugating and a dominating tactic, and it’s transparent,” she told him.

Schoen, though, was careful to say that as a “free speech absolutist,” he finds it abhorrent that Rockefeller would say he wants to shut down both MSNBC and Fox (though again, this isn’t exactly what Rockefeller said). He then characterized himself “as somebody in the center, and who has been on the left.”

Then Ingraham played her trump card: the left “has never been about free speech, unless you’re maybe a pornographer or you’re burning the American flag.” She ended the segment by giving some unsolicited advice to the left: “Get a better show!”

Watch video of the segment from Fox News below.