Laura Ingraham: You Have To Wonder Whether ObamaCare Law Was ‘Actually Kind Of Fraudulently Passed’
video

Laura Ingraham: You Have To Wonder Whether ObamaCare Law Was ‘Actually Kind Of Fraudulently Passed’ 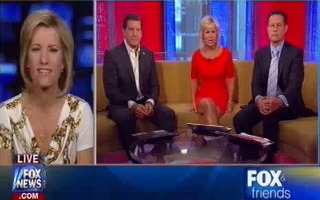 Appearing on Fox & Friends on Tuesday, conservative radio hosts Laura Ingraham broke with many Republican commentators and said that conservatives should not side with Chief Justice John Roberts. Roberts joined the Supreme Court’s liberals to declare the individual mandate in health care reform a tax. She said that Mitt Romney’s campaign, including embattled advisor Eric Fehrnstrom, are correct when they say they view the mandate as a penalty.

Ingraham said that if Congress had written the word “tax” into the law, rather than a “penalty,” they would have lost the votes of many centrist Democrats and would probably have been unable to pass the law in the first place.

“Given that fact, you wonder whether the law as passed – now called a tax – was actually kind of fraudulently passed,” Ingraham continued. She said that, as a former law clerk, she is concerned about the interpretable percent that was set in this case.

Co-host Brian Kilmeade asked Ingraham for her thoughts on Fehrnstrom telling MSNBC that the campaign believes that the Supreme Court was incorrect and that the mandate is a penalty and not a tax.

“As a legal matter, I think that Romney’s right,” said Ingraham. She said that there are 21 taxes in the law, and the mandate could be interpreted as a penalty or a tax without changing the law’s political impact.

Co-host Gretchen Carlson interrupted Ingraham and said that she believed Romney could have made a political point against President Barack Obama for allowing taxes to rise on the middle class via this law.

“I think Republicans are allowing the media to frame this for them,” said Ingraham. “I don’t think that that’s necessarily the winner here. The winner here is a president who rammed through an unpopular piece of legislation against the will of most of the people. That’s the fact that won the 2010 elections on.”

Ingraham went on to say that Chief Justice Roberts and his court got this decision “horribly wrong,” but that’s not a winning argument in her view. “So for Romney to come forward and say ‘yes, it is a tax.’ Well, he’s agreeing with John Roberts. And, I don’t think Romney should do that so I disagree with the conservatives who are saying that.”

Ingraham was asked by fill in co-host Eric Bolling what she thought of reports that Roberts flipped his vote in the last minute and may have been attempting to preserve the reputation of the court moving forward. Ingraham said that she was personally concerned that pressure could have gotten to Roberts.

Carlson said that would be “unbelievable” and “precedent setting beyond belief,” but Ingraham reminded her that a similar flip also occurred in 1992 which earned Justice Anthony Kennedy a reputation for being a swing vote. She said that Roberts has now taken that swing vote mantle away from Roberts.