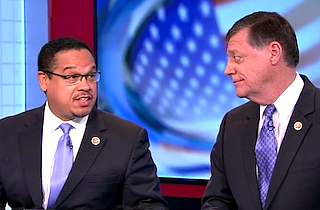 On This Week With George Stephanopoulos Sunday morning, Representative Keith Ellison (D-MN) and Representative Tom Cole (R-OK) battled over last week’s Congressional Budget Office report that projected new incentives from Obamacare would cause a reduction in hours worked roughly equivalent to 2 million jobs, with each lawmaker arguing that the report bolstered their party’s side on Obamacare.

“What the Congressional Budget Office is saying is that we’re going to discourage kids from having to be latch key,” Ellison said. “We’re going to have parents being able to come home, working reasonable hours. People are going to be able to retire. People may be able to actually cook dinner rather than have to get takeout. The fact is is that if Americans can have more choices to open up a new business they’ve been wanting to start—this is a good thing.”

“If you look at international comparisons country by country, Americans work way more than the average of industrialized countries around the world,” Ellison continued. “We might to want look at our work-life balance, and this is something that gives us a great opportunity.”

RELATED: S.E. Cupp Challenges David Plouffe on Obamacare Report: ‘This Spin on This Is Incredible’

“One of the reasons why Americans live better than people around the world, because they do, on balance—” Cole started

“What about Germany?” Ellison countered. “What about Denmark? The fact of the matter is we need a better work-life balance. Ask a working mother if she could use a few more hours in the day to take care of her family. That’s what’s really going on.”