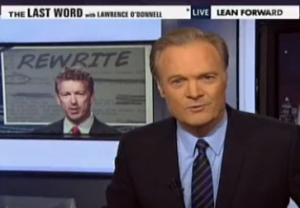 Lawrence O’Donnell thinks the staff of Republican Senator Rand Paul is not to be trusted. Paul believed the debate over whether America intervened in Libya should have happened before the air strikes took place and not after. Yet O’Donnell argues Paul and his staff conveniently forget that Paul did vote in support of an earlier bill permitting the UN to take action and that included a strong interventionist statement.

O’Donnell seems to know what he’s talking about, but the level of detail he provides to justify his attacks on Paul likely left viewers scratching their head or reaching for the remote. Apparently Paul voted in support of the UN resolution, but the vote in the Senate was by “unanimous consent.” Paul’s staff claims “voting by unanimous consent is not really voting” and apparently told other “lies” about the earlier vote when O’Donnell’s staff called and questioned them. Meanwhile, O’Donnell counters that “unamious consent is the most common form of voting in the Senate despite the lies Rand Paul’s staff tries to tell about it.” Instead, O’Donnell believes the truth is either that Paul “voted for the intervention in Libya before he voted against it” or that “both Senator Paul and his staff were too lazy or incompetent which is actually the same thing, to read the resolution.”