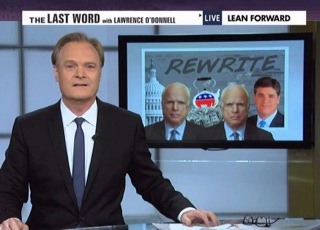 The debt ceiling debate got a whole lot more colorful yesterday as Sen. John McCain turned it into an elaborate Lord of the Rings analogy, with the Tea Party taking the protagonist hobbit role. He then took back most of what he said later that night on Sean Hannity‘s eponymous show, where he assured raging Tea Partiers that he “admired, respected, and appreciated them.” The 180º turn did not go unnoticed by Lawrence O’Donnell, who mocked Sen. McCain’s defeat in what he says should have been a “preposterous mismatch” against Hannity.

O’Donnell began by claiming to not know much about Lord of the Rings, claiming the most he has seen of the films was the compilation of clips played at the beginning of his segment (the jokingly asking, “Who is Mordor?” Going through the angry responses to Sen. McCain’s criticisms from Sharron Angle and Christine O’Donnell, O’Donnell (Lawrence, not Christine) noted that the opposition should have been a piece of cake for an experienced senator and war hero.

He then turned to the debate with Hannity, which he noted should have been a “preposterous mismatch” since Hannity was a “paper tiger who’s never met a war he didn’t support and who’s never met a war he was brave enough to participate in.” Then commenced some stone-throwing from his own glass house, mocking Hannity’s “combat cowardice” and joking that “over-air conditioned television studios are the most inclement work environments Sean Hannity has ever experienced.” O’Donnell, you see, has also worked in under-air conditioned television studios.

O’Donnell concluded that the difference between the “maverick” Sen. McCain that was a popular 2000 presidential candidate and took the Senate floor yesterday and the one that appeared on Hannity was the same mistake that did him in in 2004. “Get him in a Fox News studio, have him face down Sean Hannity, and he immediately looks like the guy who could do something as dangerous for America as picking Sarah Palin as a vice-presidential candidate.