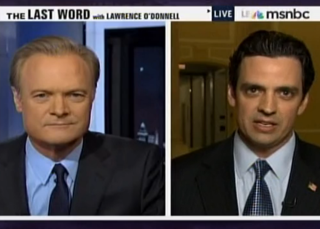 Lawrence O’Donnell has honed his program to be one of the more difficult venues for a right-wing politician to attend, and tonight solidified that reputation. Inviting Georgia Republican Rep. Tom Graves over to discuss the hurdles of the current budget crisis, O’Donnell repeatedly asked Rep. Graves about his opposition to funding Planned Parenthood, before finally dramatically concluding Rep. Graves “should be ashamed of yourself.”

O’Donnell began the interview on a contentious note, asking after a brief introduction whether Rep. Graves was “one of the voices in the meetings with [Speaker] John Boehner shouting ‘shut it down, shut it down!'” Rep. Graves, appearing confused, replied that he “didn’t know of anyone shouting” or “recall that at conference meeting,” affirming that the Republicans are “unified.”

The point seemed to have agitated both parties significantly, as it triggered a bit of barely-intelligible crosstalk until, above both voices, O’Donnell could be heard telling Rep. Graves he “should be ashamed of himself” and his “insane bill.” Despite the degeneration of the discussion, however, it ended amicably enough, Rep. Graves inviting himself back on the show in the future.