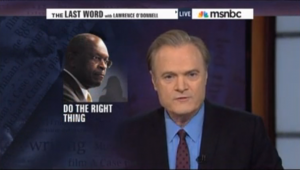 On Thursday, Lawrence O’Donnell reported on the recent challenge posed by, as the host referred to him, Herman Cain‘s “breathtakingly incompetent campaign manager,” Mark Block, for anyone with proof of Cain having committed an act of sexual harassment to come forward as “face Mr. Cain.”

O’Donnell said Black was able to make that challenge because he felt he had the protection of confidentially agreements made with the National Restaurant Association, or, as O’Donnell described it, an “anti-minimum wage lobbying operation.”

RELATED: As Pollster Reveals His Knowledge Of Cain’s Behavior, Accuser’s Lawyer Says She Will Not Go Public

Later, he encouraged viewers to boycott the businesses associated with the National Restaurant Asssociation, opining that most of them provide junk anyway. UM, NOT KRISPY KREME.