Lawrence O’Donnell Accepts Apology From Actress In Anti-China Hoekstra Ad: ‘She Did The Right Thing’ 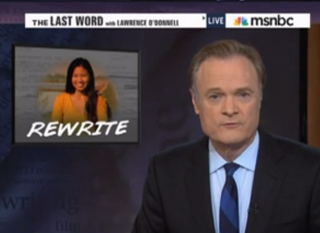 Last week, Lawrence O’Donnell very publicly called out the young Asian actress in Pete Hoekstra‘s negative ad for Congress, in which she played a Chinese girl thanking America (and Hoekstra opponent Rep. Debbie Stabenow) for making China’s economy strong. He called on all actors to do not what the actress, Lisa Chan, did, but to have principles. Today, Chan apologized on her Facebook profile, saying that the time since O’Donnell singled her out, she has felt “horrible” and knows she “absolutely” made a mistake. O’Donnell accepted and thanked Chan for her apology, which “retaught America what a real apology sounds like.”

O’Donnell noted that his staff had gotten “very close” to finding her in recent days but never quite did, until she apologized on Facebook today. “We can only imagine what she has gone through in the week since I singled her out on national television,” O’Donnell noted. “She says ‘I feel horrible,’ and we know that’s an understatement.” He noted that her “personal Hell” was not exclusively hers, as the Hoekstra campaign suffered significantly financially and in the polls from the ad, but turned back to Chan.

Noting that everyone has the “ability to make mistakes,” in an age where “the honest public apology has all but disappeared… there is not ‘if’ in Lisa Chan’s apology.” Concluding that “she just retaught America what a real apology sounds like,” he told his audience, “Lisa Chan deserves to be forgiven.”