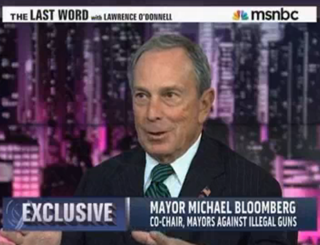 New York City Mayor Mike Bloomberg has been one of the strongest voices in favor of stauncher gun laws in his city, and tonight he visited Last Word host Lawrence O’Donnell to discuss he latest campaign to close down gun show loopholes that allow people on the Terror Watch List to acquire weapons. According to Mayor Bloomberg, Al Qaeda has noticed the loophole and is actively promoting it, at the serious loss to American security.

Mayor Bloomberg is part of a campaign to strengthen gun laws after an Al-Qaeda leader released a video promoting America as a land perfect for buying weapons. “It’s a golden opportunity,” the terrorist tells his followers, partly due to the fact that background checks aren’t required at a gun show, and people on the Terror Watch List can acquire weapons. “Mayors keep going to funerals and giving eulogies,” Bloomberg noted, of policemen killed with illegal weapons, as well as innocent third parties.

O’Donnell asked whether the NRA responded strongly to these claims that more gun control was necessary, and Bloomberg noted that they usually don’t take up this battle because “they’re not about to come out to say the rights of terrorists are greater than the rights of citizens to live safely.” Unlike O’Donnell, Bloomberg was not in favor of across-the-board gun control increases, but explicitly pushing for stronger gun laws against Al Qaeda and other terrorist elements, and for background checks for anyone wanting to purchase a gun.

Mayor Bloomberg also discussed New York’s recently passing of a law permitting same-sex unions, which he noted was “not contrary to the things Republicans stand for,” including “marriage stability” and personal responsibility. “If you want to marry someone,” he concluded, “it’s not the government’s business to tell you who.”