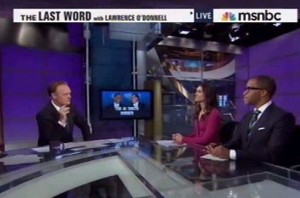 The media has a habit of overanalyzing everything that happens over the course of a political campaign, much in the same way your grade school English teacher overanalyzed every single book you read in class. Sometimes a red wall is just a red wall, and sometimes a joke is just a joke. Well, not for the folks over at MSNBC. Lawrence O’Donnell, Krystal Ball, and Jonathan Capehart did just that when they analyzed the comedic speeches delivered tonight by President Obama and Mitt Romney.

O’Donnell opened his show with highlights from tonight’s dinner, before observing that Romney made more jokes attacking Obama than the other way around. Ball said Romney went a little “over the line” and used “zingers from his stump speech” instead of mostly self-deprecating jokes. O’Donnell agreed, saying he didn’t feel comfortable with how political Romney’s jokes became over the course of his routine. Yes, because when politicians speak at an event with other politicians in attendance in the middle of a political campaign, it’s just too out-of-place to bring up politics.

Capehart said Romney’s remarks seemed like he was roasting Obama, which is somehow a bad thing. What exactly is wrong with candidates roasting each other? Capehart said the venue is mostly supposed to be self-deprecating, but there’s only so much you can wring out of that kind of humor. Not to mention Obama’s speech was just as political as Romney’s, such as when he brought up the unemployment numbers and remarked that he didn’t have a joke, he just wanted to remind people about it.

But where the analysis took a weird turn is when O’Donnell brought up the separate “you didn’t build that” jokes told by Obama and Romney. O’Donnell continued with Capehart’s point that Romney should have been joking more about himself than Obama, and Capehart managed to criticize Romney while praising Obama for what was pretty much the same joke.

O’Donnell and Ball surmised that Romney felt most uncomfortable making jokes about himself, with O’Donnell particularly emphasizing that Obama was “the good joke-teller.” Capehart said that the Romney campaign need to understand that the Al Smith dinner is not supposed to be a roast.

On a related note, wouldn’t it be great if one of the presidential debates was actually a Comedy Central roast? Let’s get Conan O’Brien to moderate and put on a show!