Lawrence O’Donnell And Panel Take On Chaos Within The GOP: Rove ‘No Longer Ruling With An Iron Fist’
video

Lawrence O’Donnell And Panel Take On Chaos Within The GOP: Rove ‘No Longer Ruling With An Iron Fist’ 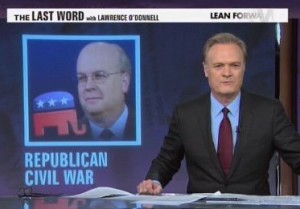 Lawrence O’Donnell took on the revolt in the Republican party against Karl Rove and his new group aimed at helping electable conservatives in primary races. O’Donnell didn’t mince any words, referring to it as complete “party warfare,” and one of his panelists said that the huge backlash against Rove proves that after years of wielding significant influence over the GOP, he is “no longer ruling with an iron fist.”

RELATED: Karl Rove Takes On Critics: Too Many GOP Groups More Concerned With ‘Profits’ Than ‘Advancing The Cause’

O’Donnell said Rove has been practically fighting for his political life since the 2012 election, and now the backlash is so widespread, even Newt Gingrich is piling on. O’Donnell brought up Rove’s defense that he’s just listening the concerns of donors, to which POLITICO’s Maggie Haberman said that Rove’s reputation is taking a bit hit, but it won’t really matter that much since he’ll likely still be able to raise a lot of money. Haberman claimed the friction in the GOP shows without a shadow of a doubt that Rove is “no longer ruling with an iron fist.”

O’Donnell agreed with a column by Gingrich that the party’s problems are bigger than just über-conservative candidates. The Huffington Post’s Sam Stein said it’s more about specific platforms in specific races, crediting people like Gingrich in the GOP for acknowledging the party may need to relax its positions on gay marriage and immigration reform. Haberman agreed, saying the bigger problem with the Republican party isn’t with particular candidates, but policies.

O’Donnell suggested if the Republicans abandoned their pro-life rigidity and became a “pro-choice, anti-tax” party, they might suddenly do much better with the public. Stein said social conservatives are slowly but surely dying out, though they still have a disproportionate amount of influence in the party.