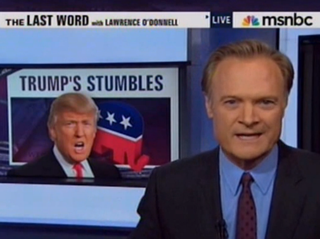 Lawrence O’Donnell continued his intra-NBC warfare against potential presidential something-or-other Donald Trump tonight, responding to the news that Trump, in fact, watches that MSNBC show “with some guy, O’Donnell” and couldn’t believe that O’Donnell would defend President Obama. O’Donnell took the opportunity to explain why he won’t have Trump on the show: “it takes a certain amount of sucking up” that he just won’t do.

O’Donnell began the segment with a Palinesque attack on Trump: “When asked the number of members of the House of Representatives, he had absolutely no idea. He couldn’t even venture a guess.” So it’s no wonder, he continued, that he wouldn’t know who O’Donnell was and would dismiss his show as “some show that gets no ratings.” “That’s the closest I can get to getting Donald on my show,” O’Donnell confessed, because “it takes a certain amount to sucking up to Donald… pretending he is some kind of adult who deserves to sit in an adult chair.” This, clearly, was something O’Donnell was not particularly up to doing.

O’Donnell then tried to explain why Trump was doing the presidential thing anyway: “because he desperately needs the income from the only paying job we know he has,” which he later described as Trump’s hosting gig on Celebrity Apprentice. He concluded his monologue by playing today’s novelty clip from Trump, about his great relationship with “the blacks,” after which he introduced Washington Post columnist Jonathan Capehart (who, as a “black,” was shocked to find out his relationship with Trump was so good, or existed at all).

With Capehart, O’Donnell redirected his ire towards NBC, to which MSNBC is, of course, related. Noting that Trump is likely to have his show canceled because “the ratings they have and everything is so terrible,” the show was “much to NBC’s disgrace,” concluding that “the NBC standard for crazy people in their primetime schedule saying mean hateful things… apparently you can do that at NBC.”