Lawrence O’Donnell Bans Tea Party Rep. Joe Walsh From His Program For Being A ‘Deadbeat Dad’ 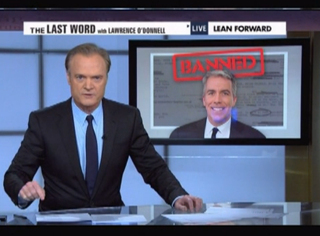 Given the assembly-line efficiency with which Congress seems to generate scandals of the “family values” variety, it takes something truly outrageous to make Americans balk these days. Last night, Lawrence O’Donnell unveiled something so simple, it may top all of this year’s sex scandals on Capitol Hill– Rep. Joe Walsh, a Tea Party favorite who released a video refusing to “place one more dollar of debt on the backs of my kids,” has a six-digit child support debt of his own.

Rep. Walsh’s prodigious child support debt isn’t exactly a new development, but gives context to some of the inflammatory rhetoric Rep. Walsh has been using in the context of the national debt recently. After a fiery exchange with O’Donnell’s colleague Chris Matthews a week and a half ago and similar performances on The Last Word, Rep. Walsh took his argument against raising the debt ceiling to his constituents, promising that he “won’t place one more dollar of debt on the backs of my kids and grandkids.” O’Donnell took great offense to the promise since, as he explains, “once you start using your children as exhibits in political debate… you have just opened the door to fair questions about financial burdens they may face now, especially if you are behind in your child support payments to the tune of $177,437.”

Disgusted and outraged, O’Donnell declared that “Deadbeat dad Joe Walsh is hereby banned from this program. He can go tell his lies about his family values and his sense of fiscal responsibility elsewhere.” He then went on to tear Rep. Walsh apart for putting his political career above his children’s well being, loaning his campaign money that could have gone to pay his child support. Instead, O’Donnell offered the common sense response to receiving a child support bill:

Here is how any decent set of family values should guide a father who owes child support: first pay whatever amount is legally agreed to or ordered by a court, and then constantly offer whatever additional help you can afford. Yes, buy the kids a new computer even though the court order says you don’t have to because you can do it, and because they’re your kids. Do it because it’s the right thing to do. Do it because you’re not trying to get away with doing the least you have to do legally– you’re trying to do the most you can do. That’s what being a father is: doing the most for your children every day in every way that you can.

The well-earned tirade gave O’Donnell the opportunity to showcase what makes him unique among the voices of the left: his social conservatism. O’Donnell takes family values more seriously than anyone on his network, and possibly anyone in cable news– he is likely the only “liberal” (in the modern, not classical sense) on cable for whom it is a pet issue. It’s a trait that is easy to miss, as “family values” to O’Donnell include things like the legal right for same-sex couples to marry and raise children and government obligations to help the less fortunate, but just because they aren’t the same family values that right-wing conservatives promulgate doesn’t make them any less moralistic in their nature. The last time O’Donnell displayed such passion for the sanctity of the family and the virtues of privately doing good was his attack on Newt Gingrich for spending lavishly at Tiffany’s– then highlighting avarice as the grave sin, not selfishness. But they are two sides of the same coin. O’Donnell staunchly believes that private virtue must reinforce public policy, and in this case Rep. Walsh is woefully deficient in the latter, enough to entirely invalidate his thoughts on the former to O’Donnell.